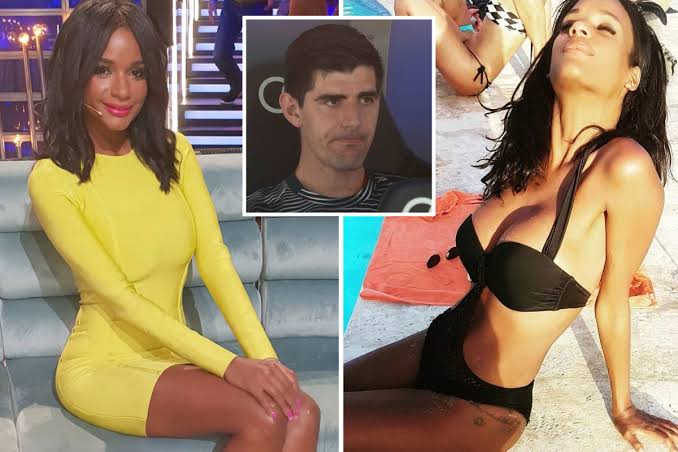 Real Madrid,  Goalkeeper, Flirt Real Madrid goalkeeper Thibaut Courtois has risked the wrath of former flame Alba Carrillo by messaging her colleague Liz Emiliano. The Belgian shot-stopper brutally publicly rejected Carrillo after it was reported he was dating the stunning Spanish TV presenter.But the 26-year-old was quick to end the budding romance with the blonde beauty, as he said: “We are not a couple and we never will be!”

Carrillo – who boasts over 433,000 followers on Instagram – accused Courtois of a “bloody massacre” after she revealed she was the subject of abuse on social media. Addressing Courtois‘ comments, she said: “I am leaving for a while because I think what you’ve done to me is a bloody massacre.

“Football fans, general riffraff and the media have mercilessly gone to town.

“I hope that T. Courtois explains the reason for his words that have generated a lot of hate towards me.”

And things have got worse for the 32-year-old with claims that the ex-Chelsea star is growing close to her work colleague at Spanish TV channel Telecnino.

According to Mundo Deportivo, Courtois has been sending Emiliano flirty messages on Instagram.

They report that the duo are trying to keep their relationship secret since none of them follow each other on social media.

Emiliano, 35, featured on the Spanish equivalent of Big Brother, while she also boasts over 296,000 followers on Instagram.