A fuel-laden truck on Thursday spilled its content on the road in an accident that resulted in the death of two persons who were burnt beyond recognition.

Eyewitnesses alleged that fire-fighters came about 40 minutes after they had been informed of the incident.

Six vehicles and 10 motorbikes were also burnt in the fire incident which happened in Ibadan, Oyo State.

Eyewitness account stated that two unidentified persons, male and female, were burnt to death in the inferno that happened on Thursday afternoon at Onipepeye area, along the Lagos-Ibadan Expressway, Ibadan. 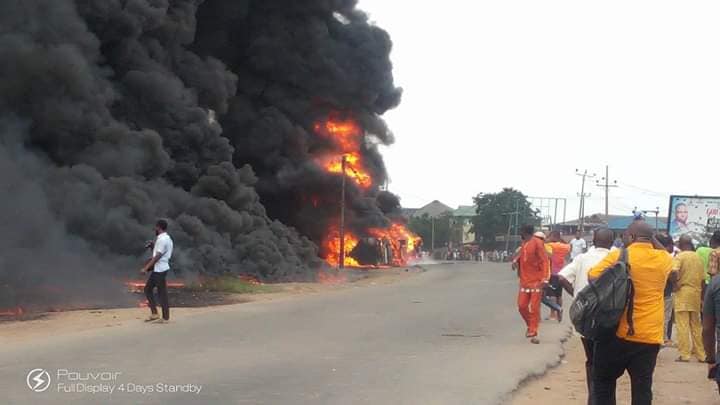 The inferno, which started around 2:05pm, occurred while the fuel tanker driver coming from Lagos lane tried to manoeuvre a commercial Nissan Micra taxi and, in the process, lost control and fell.

“It was the spilled fuel from the fallen tanker at the main road that caught fire from one pit under the Onipepeye bridge, and before we could say anything, we heard a big explosion,” said a source at the scene.

The source continued, “It was so horrific, thick flames engulfed everywhere and in the process, two people were overwhelmed by the smoke and were subsequently caught in the fire as others scampered to safety.

“We called the fire service personnel to come and rescue the situation before the fire started, but it took them more than 40 minutes before they arrived, and by the time they got here, the fire had already burnt two people to death,” he added.

Below is a video showing the fire outbreak.