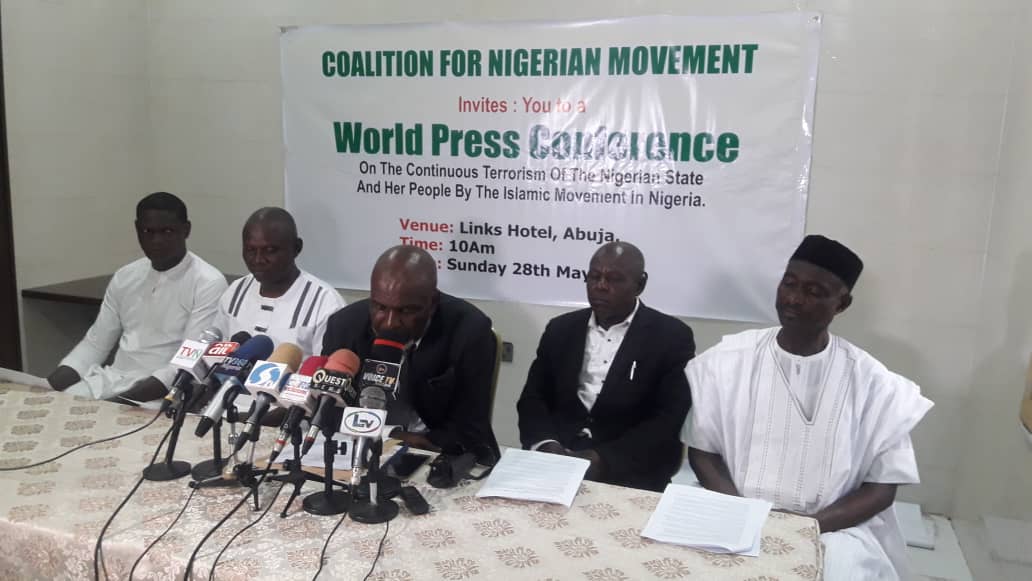 The Coalition for Nigeria, a civil society orgnaisation, said it has uncovered plots by Iran and the Islamic Movement in Nigeria (IMN) to terrorize Nigeria.

The coalition claimed that Iran is discreetly breeding another terrorism sect in Nigeria through IMN extremists, saying that the group allegedly received over $20 million donation recently from the country to fund terrorism activities in the country.

Patriot Sabo Odeh, National convener of the coalition at a press conference on Saturday, said IMN is an affiliate of Islamic State West Africa Province (ISWAP) and should be declared a terrorist group.

He, therefore, called on the Nigerian government and particularly, the Attorney-General and Minister of Justice to expedite action on designating the IMN sect a terrorist’s organization to finally lay to rest the tormenting “ghosts of these monsters and religious extremists.” 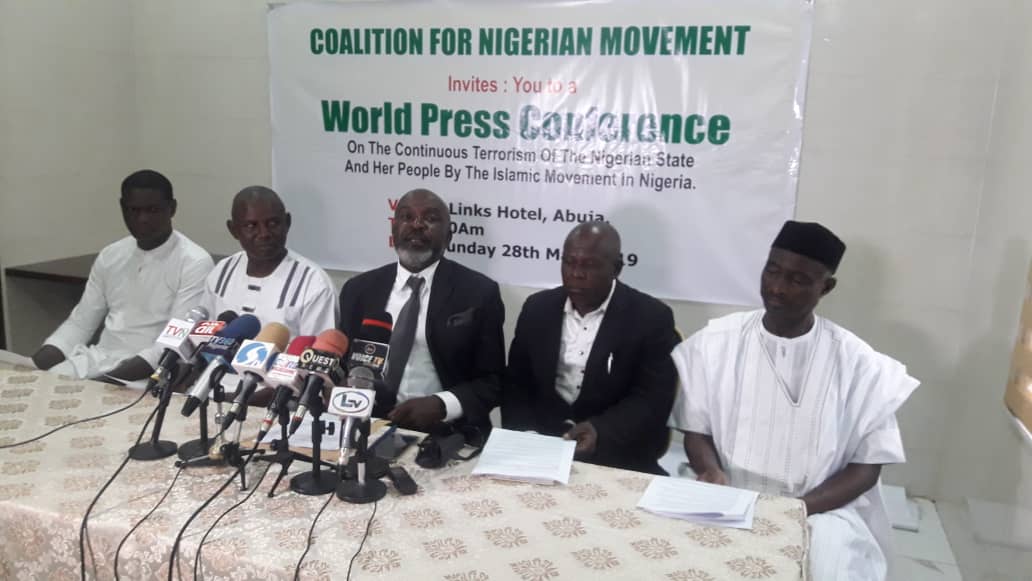 Text of his speech below.

Surely, we are germanely motivated to draw the attention of Nigerians and the Federal Government of Nigeria (FGN) and the world at large to the solidified mutation and grooming of another terrorist’s sect in the country. It’s members have disguised under the canopy of the Islamic Movement in Nigeria (IMN).
3. No one is in doubt that the Islamic Movement in Nigeria are affiliated to the Islamic State (ISIS), a dangerous terrorism group based in the Republic of Iran, with a knack for sponsoring terror sects in countries all over the world. We must not forget that Nigeria has had a taste of their venomous swords in Boko Haram insurgency.

IMN’s leaders from Sheik Ibraheem El Zakzaky to those at the lower rungs of leadership of this religious extremists or violent sect have never hidden its affiliation to ISIS and the Republic of Iran. All have boasted publicly and at different times of importing the Iranian Shia ideology into Nigeria and the West Africa sub-region.

In recent times and with the lawful detention of the Spiritual leader of IMN, Sheik El-Zakzaky, the sect members have engaged security agents in countless violent confrontations in Abuja or elsewhere under the pretext of protests over the detention of their leader. But the protests in all verifiable instances defile civic conventions of public protests.

Therefore, we are aghast at the tolerance and continuous celebration of the glaring importation and practice of the Iranian religious extremism in Nigeria by the so called Shiites. It’s a serious potential threat to national security and sovereignty of the Federal Republic of Nigeria.

Unfortunately, the federal authorities are handling it with kid gloves. Yet, the IMN members have been caught many times in possession of illegal fire arms and ammunitions while on the so-called public protests. And the notoriety of the sect members has continued, unchecked, unabated and blossoming, in spite of the other subsisting and dire insecurity challenges facing Nigeria.

Nigerians were again assailed by the impudently ferocious, cruel and crude exhibition of violence against the Nigerian state and security agents a few days back. The IMN sect members in hundreds of thousands sneaked into Abuja and besieged the gates of the National Assembly Complex in the guise of protests to commemorate the 68th birthday anniversary of IMN’s spiritual leader, El-Zakzaky.

But as usual and consistent with the character of the IMN, the supposedly peaceful protests turned violent as they forcefully broke into the gates of the National Assembly complex, chanting anti-government songs and “Alahu Akbar.” They also brandished dangerous weapons, compelling the Police sentinels to take to their heels to avoid another clash with the sect members. 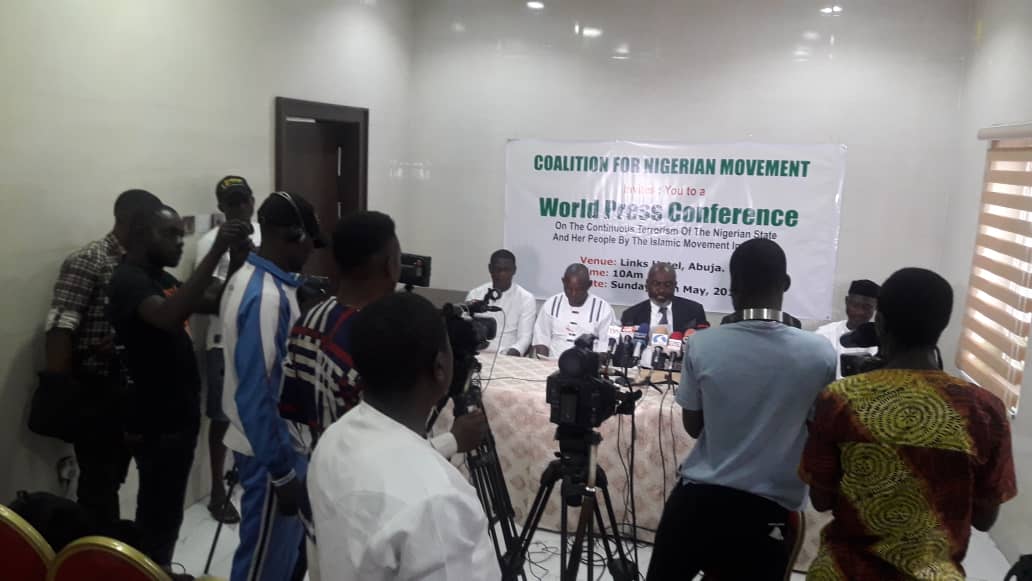 It is very clear to all discerning minds that El-Zakzaky is standing trial over alleged acts of terrorism which in the past resulted into mass murders, alongside other adherents of his sect in possession of illegal fire arms in quantities and sophistication only permissible in the hands of Nigerian security agents or state recognized agencies.

We have no iota of doubt that the IMN are operating a republic within a republic, which is insalubrious for the security and peace of law-abiding citizens. Therefore, the failure of the relevant federal authorities to tame this emerging terror sect in Nigeria at its embryonic stage has bolstered their courage to relentlessly harass the state and security agents. Many Nigerians have met their untimely deaths in the hands of the IMN sect members.

The Coalition for Nigeria is alarmed and thunderstruck on why such a deviant organization like IMN, outlawed by the Kaduna State Government over two years ago has been allowed to still exist without the proper designation of the group as a terrorist sect by the Federal Government of Nigeria.

The hesitance of the FGN to declare IMN a terrorists group is responsible for its sustained acts of threats to public security and safety. It has stretched to the extent it is now ominous that the continues existence of the Nigerian state and its civilian populations are under threats by the nebulous and overt criminal actions of the sect members.

We appraised the sequence of the IMN’s recent violent outings, and came to the painful conclusion that the group in Nigeria plots to compound Nigeria’s already daisy security situation and that of the Wes African sub-region. It is steadily and covertly breeding a terror sect to replace Boko Haram.

It is evident that the ISIS affiliated Boko Haram, which tormented Nigerians for years has been severely weakened by the Buhari Presidency. And an irked ISIS has gone underground to sponsor other terror sects in Nigeria. We gathered reliably that the IMN group in Nigeria allegedly received over $20 million donation recently from the Islamic Republic of Iran to fund terrorism activities in Nigeria.

Our findings revealed that ISIS’s experiment in Nigeria using IMN is fashioned after the model used in the Sri Lanka bombings of Churches and hotels on April 21st, 2019, which killed over 320 people on Easter Sunday.

In fact, media reports credited to the Sri Lanka authorities said, “the attackers were affiliated with a local terror group. The attackers were radical Muslims. Their motives were religious. Their targets were Christians. “And two days later, ISIS in a statement, claimed responsibility for the Sri Lankan suicide attacks on Christian populations.

With the manner the IMN sect members are progressively becoming violent and the extent they have stockpiled arms and ammunitions, which they openly display each time they confront the Nigerian state, we fear a possible replication of the Sri Lankan scenario in our country. And lawful steps must be taken to curb the excesses of this sect.

We dare say, the Nigerian Government particularly the AGF/Minister of Justice is senselessly romancing an emerging terror sect in the country. This is unacceptable and condemnable. IMN headquartered in Kaduna State has been outlawed. And logically, nobody has the legal right to operate under its banner anywhere in Nigeria as they constantly assemble to violently invade Abuja. No new association of its ilk has been registered anywhere in the country.