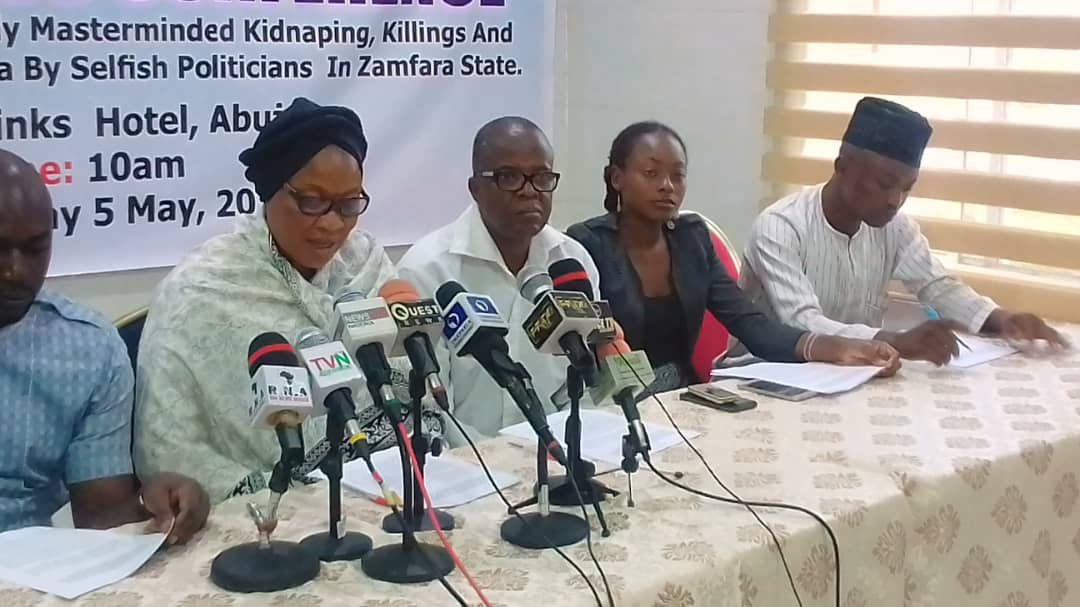 The group specifically alerted Nigerians that politicians benefiting from illegal gold mining in Zamfara were the ones sponsoring the endless unrest in the area.

CRCN, therefore, called on the attention of the international community and relevant security agencies to save Nigerians from the hands of politicians causing unrest in the North West region.

National Convener of the group, Princess Ajibola, while addressing journalists in Abuja, warned that if the killings persist in Nigeria, the entire country faces the prospect of shortages that will result in increased food prices.

She said, “It is with this sense of alarm that we are calling attention to the security breaches and killings going on in North-West of the country. We should have ordinarily specifically mention Zamfara state where so called bandits have been wasting human life with incessant killings. But efforts by the Federal Government to curtail them have seen this contracted killers fanning out into Sokoto and Katsina States.

“The potentials are there for them to move further into Kebbi, Kano and just any state where their sponsors direct them to go. This relocation of the killers has been confirmed by the Chief of Army Staff, Lt. General Tukur Buratai.

“Our concern is that the North-West is a strategic remnant of food production axes that has not been destabilized by political jobbers that are deploying terrorism to extract political and economic advantage.

“Food supply from the North-East has earlier been reduced by Boko Haram terrorists, who happen to have political backers and sponsors. Food production in the North-Central trough has been hampered by killer militias, killer herdsmen and ethno-sectarian violence. That leaves the North-West as the last remaining source of certain categories of food crops and now Zamfara state, politicians in that state, are about plunging the country into hunger.

“It is most unfortunate that it is their greed for gold and illicit revenue from the precious metal is the reason they are prepared to starve the rest of the country to death. While the incessant killings were earlier classified as the handiwork of bandits, it has now been established that the killers were carrying out this killings to protect the illegal mining activities in the area.

“A Federal Government ban on mining activities in Zamfara state and environs has only sent the killers to commit more acts of violence, apparently on the instruction of their sponsors. Knowing the damage that the Nigerian military is capable of inflicting on them, they have escaped into neighbouring states were they continue to carry out attacks. These attacks are as mindless as they are senseless. The only ideology driving it is the instructions they take from the politicians that are sponsoring them. Their victims are random and have no history, connection or contention with the killers. They kill just to create the sense of insecurity that their sponsors crave.

“These politicians have been identified as comprising high level serving and former state government officials including some that had held ministerial appointments at the federal level in the past. The Zamfara state politicians have been found out to be the owners of the mining operations. At the very least they are partners with the foreign firms that mine gold in Zamfara state.

“The killings they deployed have, unfortunately, impacted in unexpected ways, or they might have been aware of these consequences and their greed still allowed them to put themselves above the 200 million Nigerians that could be imperilled. The killings have snuffed life out of able bodied farmers who would have grown food crops in the next farming season. It has scared those still alive away from the region with the result that there would not be enough farmers around when the planting season begins.

“The general security outlook that has been created in the entire region is such that those that could potentially invest in agriculture against the next farming season will be compelled to take decisions that will not be friendly to large scale food production. The spread of these killers to other states will equally replicate these ugly prospects and outcomes in these places.

“These dangerous potentials call for concerns. You may wonder why we are here in Lagos raising alarm about far away Zamfara and states around it. We will mention just two instances. If these killings should disrupt rice production in Kebbi state then we are in for a tough time because we know how much rice from this place means to Lagos state. It the crisis impact tomatoes production not only will we have to face the crisis of paying so much for so little, we will also face the ugly prospect of job losses in companies that rely on tomatoes from the area for production.

“If these killings persist in Nigeria, the entire country faces the prospect of shortages that will result in increased food prices. It is doubtful that Nigerians can absorb the resulting price shock given the ongoing economic restructuring. Such potential spike in food prices has been known to have caused upheavals in many countries. It is an outcome we must avoid at all costs. If we allow things to get that stage, no part of the country would be spared.

“At this point we like to remind Nigerians that the sponsorship of Boko Haram by politicians was initially dismissed as conspiracy theory. But that was until key commanders of the terror group were being arrested in the homes of politicians and being linked to important members of the political class. We also want to remind you that those empowered by these politicians later became estranged from those that commissioned them as assassins of political opponents. Today Boko Haram is an international plague. They no longer respond even to those that first brought them together.

“It is on this note that we for decisive action (s) to be taken against the masterminds of politically motivated banditry, kidnapping and killings in Zamfara state and environs. These sponsors of the atrocities may serving and former political office holders in Zamfara State Government but to the extent that they threaten the peace of Nigeria, the whole gamut of the applicable laws should be thrown against them.”