Father of a 15 year old girl recounts how his daughter died from STD after she was infected by her mother’s cousin at the age of 2.

A South African man has taken to Twitter to recount how he lost his 15 year old daughter to the cold hands od death after 13 years of fighting and STD she got from her mother’s cousin at a tender age of 2.

He explained how his daughter was infected with HIV/AIDS at the age of two.

According to him, his firstborn’s mother kept the molestation of the two year old by her cousin away from him until she was 8 year old and he found out himself when she even developed WARTS kwi Private Part, she was taking drugs.

Photo: Man ”tied up and sent back home” after leaving his…

At the age of 2( Two ) she was raped by her Mother’s Cousin and got infected with HIV&AIDS, her mother kept it a secret. until I found out myself when she was 8(eight years old ),she even developed WARTS kwi Private Part ,she was taking drugs

She was denied of medical removal of WARTS kwi Private Part ..By A certain Docter at Embhuleni Hospital, Elukwatini, Nhlazatshe, Mpumalanga Province

Now My Angel ,My Firstborn is nomore    I am broken ! I want to be involved in any Organisation that helps girls who were raped ,who were abused ! I would love to volunteer    and change someone’s life ,by so doing I will be making my daughter’s spirit happy 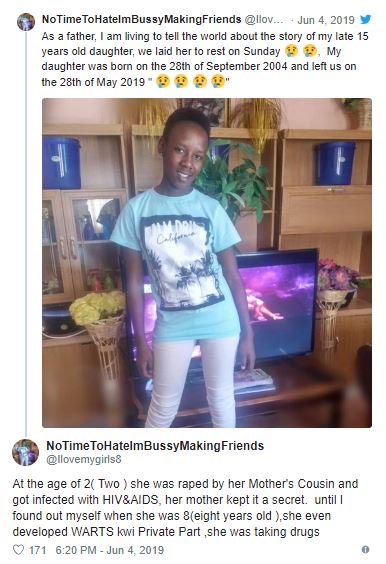