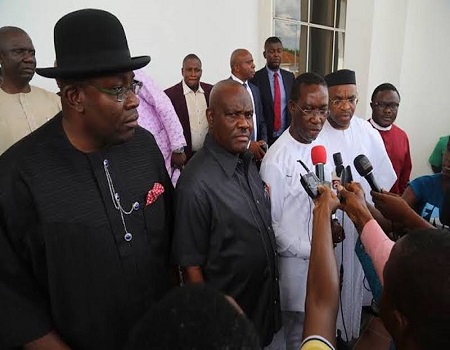 Governors elected under the Peoples Democratic Party (PDP) met in Abuja to take a position on the elections into the leadership positions of the National Assembly scheduled for Tuesday.

The meeting under the aegis of the PDP Governors Forum,took place at the Bayelsa State Lodge, Maitama Abuja, hosted by the forum chairman and Governor of Bayelsa State, Henry Dickson.

The meeting was ostensibly to fashion out a common position as the legislators elect their leaders for the ninth assembly.

It was not clear whether the main opposition party will be presenting candidates within the party or would side with the candidates being floated by the ruling All Progressive Congress (APC).

The meeting is also being attended by immediate past Speaker of the House of Representatives, Yakubu Dogara, who has already denied interest in the speakership position.