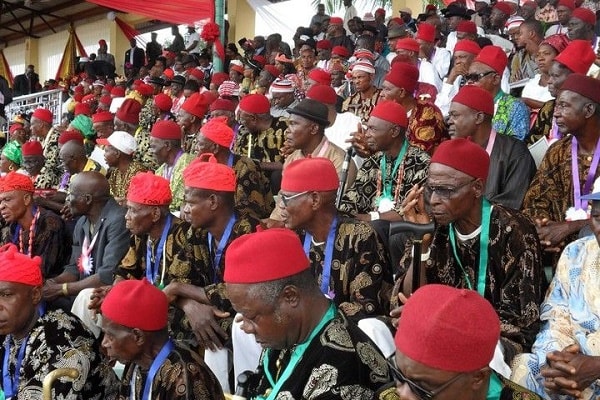 The One Nigeria Coalition has advised apex Igbo socio- cultural, Ohanaeze Ndigbo and Northern Youths Coalition to first turn over a new leaf from its bigotry stance before even attempting to address issues of national interest.

The Coalition’s charge comes in the light of the recent outburst by both groups over the Federal Government’s proposed RUGA initiative.

In a press release signed by President, Charles Mbani on Sunday after an emergency meeting, the One Nigeria Coalition said this has become imperative to avoid unnecessary heating of the polity which could ultimately lead to social and political unrest.

Recall that the Northern Youths Coalition had in a televised press conference addressed by its spokesperson, Suleiman Abdul Aziz, vowed to take it out on Southerners living in the North if Southern governors did not accept the implementation of RUGA initiative.

This apparently didn’t go down well with the Igbos who fired back shots, labelling the initiative an “Islamisation and a Fulanisation policy.”

The One Nigeria Coalition therefore urged both groups to conduct its affairs in line with a pledge to Nigeria our country.

Insecurity: We will defend every Igbo man, Ohanaeze declares

Use Ogun, Amadioha, Alaogbaga to administer oaths on corrupt people,…

The One Nigeria Coalition arising from its emergency meeting in light of the recent outburst by the Northern Youths Coalition and the subsequent response by Ohaneze Ndigbo wishes to state that both organizations have exhibited a high sense of unpatriotic acts that defeats every sense of unity of heart and purpose.

The statement credited to the Northern Youths Coalition was issued without recourse to the fact that Nigeria, as it stands, does not need divisive and insensitive calls of this nature given the fact that there has been a mutual suspicion amongst the various tribes and religions in the country.

It is expected that Nigerians regardless of our ethnic or religious affiliations, just as a matter of necessity, see ourselves as brothers and sisters in our quest for greatness.

The One Nigeria Coalition states in unequivocal terms that the outburst by the Northern Youths Coalition and the subsequent response by Ohaneze Ndigbo are careless, utterly disappointing and unbecoming of a group such as Ohaneze Ndigbo.

The One Nigeria Coalition much as it condemns the statement by the Northern Youths Coalition believes that Ohaneze Ndigbo went overboard in its response by labelling the RUGA initiative an “Islamisation and a Fulanisation policy.”

It is instructive to state that policies aimed at resolving herdsmen and farmers’ crisis cannot be termed “Islamisation and Fulanisation” This is quite insensitive on the part of Ohaneze Ndigbo, and as such it behoves on the leadership to recant such statements in the interest of peace and tranquillity.

The farmers and herdsmen crisis in Nigeria can only be resolved through a holistic approach by stakeholders and not biased, sentimental ethnic warlords like the Coalition of Northern Youths and the Ohaneze Ndigbo who have clearly shown times without number that their ultimate aim is to plunge the nation into monumental crisis.

The Northern Youths Coalition and Ohaneze Ndigbo by their recent posturing have indeed lent credence to the suspicion that their motives have not been in the national interest but rather regional/clannish interests which serve no good now and in the future of our great country.

The One Nigeria Coalition, therefore, resolves as follows:

That calls by the Northern Youths Coalition for the implementation of the RUGA initiative across the country within 30 days was careless, as much as it was reckless and should be disregarded by well-meaning Nigerians.

That the counter-response by Ohaneze Ndigbo was also careless and unbecoming of an organization with a supposed high standing in Nigeria as the umbrella body for the Igbos in Nigeria.

That the Northern Youths Coalition must conduct its affairs in line with a pledge to Nigeria our country, to be faithful, loyal and honest, to serve Nigeria will all strength, to defend her unity, uphold her honour and glory.

That Ndigbo Ohaneze should be circumspect in its public utterances if its indeed committed to the unity of Nigeria as a country.

That all parties concerned must desist from acts that would set the country on the path of war, instead they should channel efforts towards actions and activities that would further unite the country in the interest of all.

This is on the heels that it is a known fact that there are peaceful approaches to resolving differences as against threats and counter threats.

The One Nigeria Coalition wishes to state that those without the interest of the country at heart should desist from commenting on national issues, especially issues that they are ignorant about.