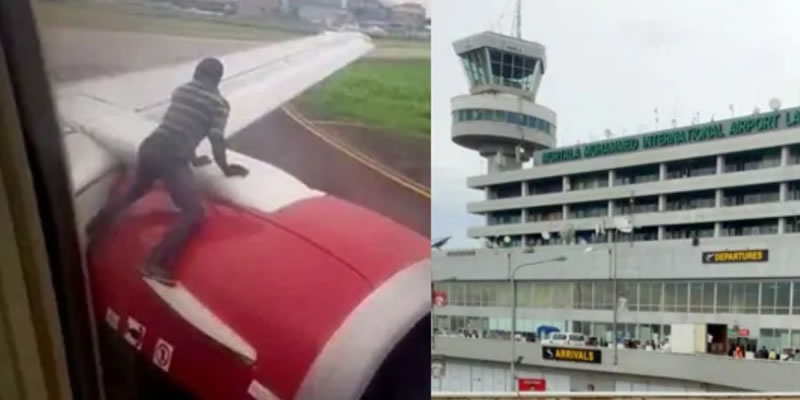 The Federal Airports Authority of Nigeria (FAAN) has revealed the identity of the man who climbed on the wings of an Azman Aircraft, waiting for clearance from Air Traffic Controllers at the Murtala Muhammed International Airport (MMIA) in Lagos.

The man who climbed on the wings of an Aircraft at the Murtala Muhammed International Airport in Lagos is said to be a Nigerien identified as Mr Usman Adamu and he reportedly lives in Iyana Ipaja area of Lagos State.

Breifing journalists on Saturday in Kano, the Managing Director, Federal Airports Authority of Nigeria (FAAN), Captain Rabiu Yadudu said the stowaway is currently in custody of the Airport Police Command over the incident considered a serious security breach, and also led to the indefinite suspension of four Aviation Security unit heads.

Less than 24 hours after the Nigerien climbed the fuselage of an AZMAN Air aircraft at the Lags Airport, the Federal Airports Authority of Nigeria ( FAAN ) has suspended indefinitely the Avistion Security Unit head who were on duty when the incident occurred.

The suspension of the officials according to its spokesperson, Mrs Henrietta Yakubu is pending the completion of on going investigation into the security infringement.

Yakubu said In the interim, a General Manager of the Authority, Dr. Anne Enyinnaya-Egbadon, has been detailed to take charge of security at the airport. Other affected officers have also been replaced.

She said :”‘The current arrangement is aimed at ensuring an efficient and thorough investigation towards the recovery and sustenance of the airport’s proactive security integrity.

“FAAN views this breach as a serious security concern and has commenced investigation to ascertain the remote and immediate causes of this incident to forestall future occurrence.”