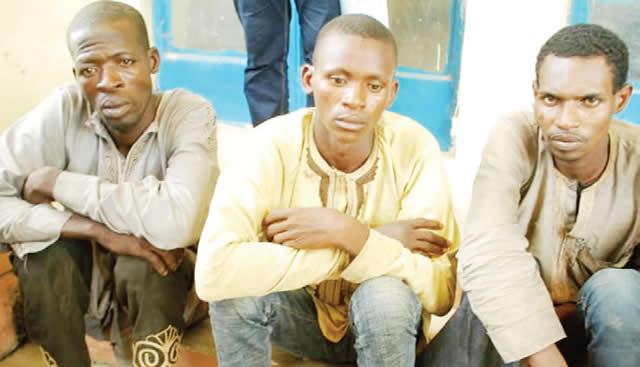 Three people have been apprehended by the Niger State Police Command for alleged armed robbery.

The suspects : Usman Alhassan , 30; Haliru Usman, 27 ; and Sani Idi, 27 , all from Maikujeri village, were arrested by a team of policemen attached to the Operation Puff Adder.

It was learnt that the three -member robbery syndicate had made life miserable for the residents of Rafi over the past few months before the suspects were nabbed.

Northern City News gathered in Minna on Thursday that the suspects were linked to several robbery incidents in the area .

One of the suspects, Alhassan, who spoke in an interview with our correspondent , said , “ We have been into robbery for some years now . I had hoped that we would make enough money to quit and go into legitimate business before our arrest .”

The state Police Public Relations Officer , Muhammad Abubakar, confirmed the arrest , adding that the suspects had confessed to the crime .

Abubakar said the operatives recovered one fabricated AK – 47 rifle with an empty magazine and 15 bundles of new wrappers from the suspects .

He added that the matter would be charged to court after investigation.