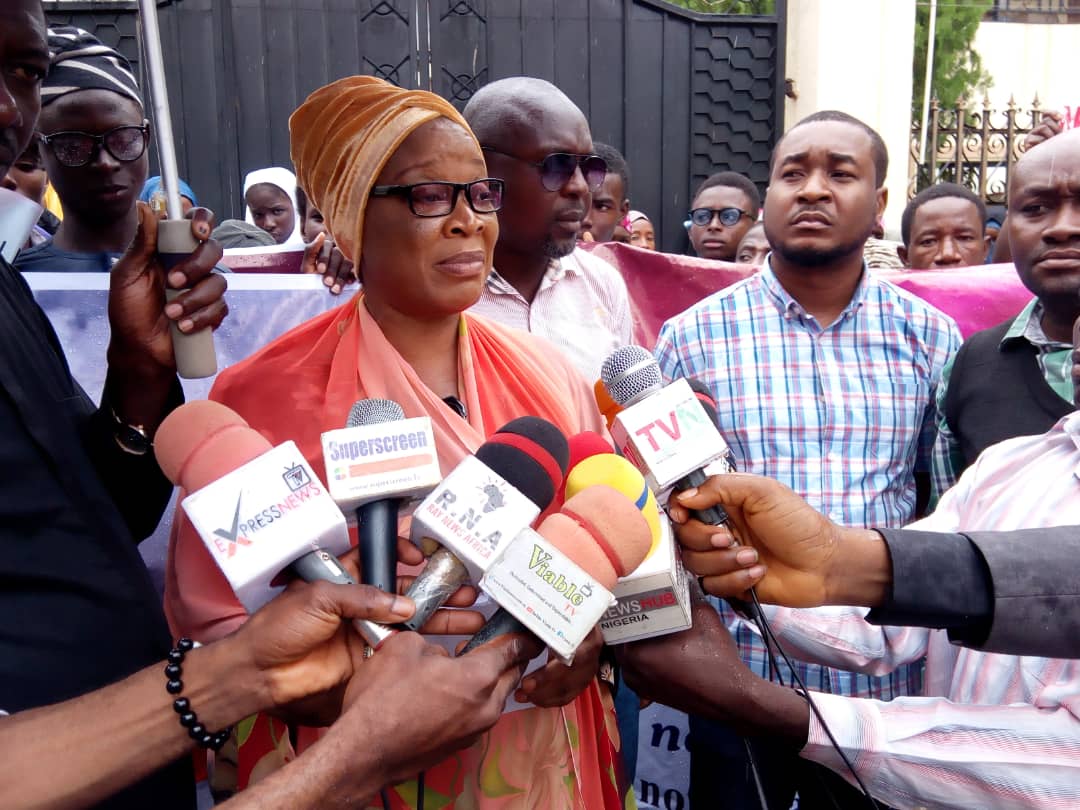 The Coalition for Civil Rights and Good Governance has threatened to embark on “40 days civil disobedience” over the refusal_of Amnesty International to leave the shores of Nigeria.

The group stated this on the 7th day of its occupy Amnesty International office, Abuja over its alleged connivance with some agents of destabilization to cause unrest in Nigeria.

CCRGG vowed not to give up until the NGO leaves Nigeria.

Addressing newsmen on Wednesday in Abuja, Princes Ajibola, President of the group, averred that “If we are pushed to begin the 40 days occupation, our member will make a daily advance of one metre upon the premises of Amnesty International until we enter its reception, workstations, conference room and offices to bodily throw out its staffers and escort them to the airport.”

Seven days ago, we took the bold step of standing up for our country by openly confronting the monster that threatens its future in the form of an international non-governmental organization called Amnesty International. We consistently occupied the Amnesty International for the seven-day period irrespective of the intense blackmail and propaganda directed at us by the NGO.

The occupation has been illuminating for us because it surfaced a lot of facts and useful information that were hitherto in the realm of conjecture.

For one, we have been able to establish that the conspiracy against the existence of Nigeria is more extensive and elaborate than previously thought. While Amnesty International is the arrowhead of the foreign component of this evil agenda, it has a large network of other NGOs, CSOs and even quasi-business entities that are running errands for it – these are the groups that jointly issued statements to condemn the occupation of Amnesty International’s office. Individuals that are on its payroll equally exposed themselves as such by condemning our action.

The extent of Amnesty International’s infiltration of Nigeria is alarming to a point where it even has the National Human Rights Commission (NHRC) on a leash like a dog. It launched NHRC like an attack dog against this protest in an act of desperation forgetting that it has exposed the lapses at the Commission in terms of playing its own role of monitoring issues of human rights in Nigeria. We now understand that NHRC deliberately abandoned its duties to create a vacuum for Amnesty International to exploit. Our protest exposed this unholy alliance, which forced NHRC to tediously attempt to disparage our efforts.

Not to be left out are members of the opposition. The people that contracted Amnesty International to run local side shows for them in the course of implementing its internationally hatched destabilization agenda. They owned and tele-guide the proscribed organizations like IMN and IPOB as well as anarchist movements like RevolutionNow and DaysofRage, which have been deployed to cause widespread violence. Even as we occupied its offices, the NGO continued to defend the rights of these groups to destroy Nigeria without being challenged or prevented from doing so. It defended their incitement and call to violence as “freedom of speech”.

For those that ever doubted that Amnesty International is interested in plunging into war, its sponsorship of the fake revolution by the proscribed and anarchist movements against the democratically elected Federal Government led by President Muhammadu Buhari is a final proof that should jolt all patriotic citizens into action. We should be alarmed that upon being found out as a subversive organization, instead of giving up its destabilization agenda, Amnesty International has rather intensified its attack on the Nigerian state while urging that inciting and hate speech should be allowed as “freedom of expression”.

This strategy had served the NGO in other countries that are today in disarray and it is to our collective peril to allow it replicate same successfully in Nigeria.
It is instructive that Amnesty International and its allies have condemned our occupation of its offices while decrying our call for more Nigerians to join the protests against its subversive activities while defending the rights of anarchist movements to do exactly the same thing and even worse against the Nigerian state and its government.

The implication is that the NGO is not willing to accept the treatment it is encouraging its clients to give the federal government. It is clear that this organization knows that the people it is supporting are doing the wrong thing but it is defending them simply because it wants to get at the government and weaken it.

It was discovered that the protests being backed by Amnesty International are a fallback position after its support for Boko Haram and the Islamic State West Africa Province (ISWAP) did not translate into an ability to penetrate metropolitan cities and carry out attacks against places of interests. An option to use violent protests by IMN and IPOB similarly failed.

But we have also learnt that this NGO has no desire of giving up on its destabilization agenda as it will always plot new schemes to achieve its goals whenever its strategy is defeated.
This is why we have resolved that Amnesty International must leave Nigeria now. We stood up, as a coalition of several groups, to challenge its subversive activities in the last seven days. We expect that this organization will use the benefit of the end of the seven days occupation to slink away at night because criminals are accustomed to making their getaway under the cover of darkness.

But where we discover that the NGO continues to violate the space of Nigeria by remaining in the country after these seven days of occupation, we want to categorically warn that the various groups may be forced to return on Monday, this time for a round 40 of days of occupation.

If we are pushed to begin the 40 days occupation, our member will make a daily advance of one metre upon the premises of Amnesty International until we enter its reception, workstations, conference room and offices to bodily throw out its staffers and escort them to the airport. The 40 days will witness impassioned Nigerians overrunning this Office with their properties to permanently occupy the place until the needful is done.

It is reassuring that more Nigerians have indicate interest to join the occupation that will expel the monster that is threatening Nigeria from the jurisdiction of the country. We salute the patriotism of these people that have indicated commitment to act even before they are called upon just as we salute all Nigerians that have come out in solidarity with this protest. We shall keep everyone up to date on the status of the protest and when the 40 days of occupation will begin.

Finally, we want to put Amnesty International, its allies and supporters on notice that there will be no giving up until it shuts down its operations and leave Nigeria. The worst that can happen is for it to unleash law enforcement agents of thugs on us and we are prepared.

Video: Group of Igbo men pledge to save Nigerian man held as human…