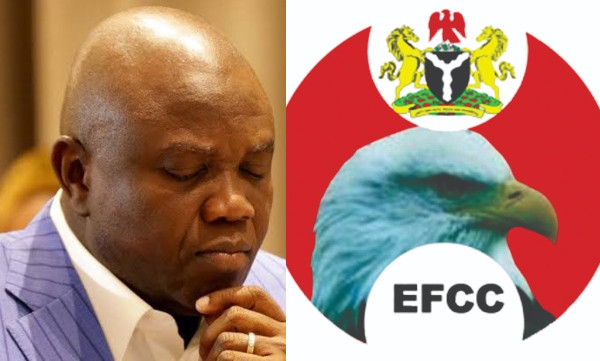 The alleged raid on the residence of former governor of Lagos state, Gov. Akinwunmi Ambode by officials of Economic and Financial Crimes Commission (EFCC) has caused confusion in Lagos.

Few hours after the denial of the commission, they (EFCC) finally admitted the raiding of the former governor’s home.

According to eyewitnesses report, the operatives of the commission were stopped by residents of Epe (Ambode’s hometown) from raiding the former governor’ home which was earlier denied by the anti-graft agency. A group of young lawyers claimed that they foiled the attempt of the EFCC officials to incriminate the former governor by dumping a bag reportedly containing foreign currencies in the residence of the former governor of Lagos state, Akinwumi Ambode.

WITHIN NIGERIA gathered that a Lagos court froze bank accounts linked to Ambode over an alleged N9.9 billion fraud two weeks ago likely to be the reason for the raid which has been denied by the former governor of the state.

While reacting to the anti-graft raid, Ambode urged his supporters and the general public to remain calm and law-abiding, saying there is no cause for alarm.

This was contained in a statement signed and released by his media aide, Habib Aruna.

It reads thus; EFCC visited the Epe country home and Parkview Ikoyi residence of Mr. Akinwunmi Ambode, former governor of Lagos state with warrants to conduct search. These searches were carried out extensively and at the end of the exercise the operatives left without any incident.

“The former governor reiterates that the EFCC has till date not had any direct communication with him on any subject matter whatsoever and if or when it occurs he is ready and willing to respond.

In a statement signed and released by the head of media and publicity of the anti-graft agency, Wilson Uwajuren stated that EFCC operatives were attacked by Ambode’s hoodlums.

He further disclosed that three officers were injured in the attack, while the EFCC official vehicle was damaged.

Wilson said  “the EFCC had obtained valid warrant to conduct search on Ambode’s residences in Park View,  Ikoyi and country home in Epe,  as part of ongoing investigation of alleged malfeasance”.

“The attack was totally unprovoked as the Commission’s operatives were civic and did not molest anybody. The Commission therefore frowns at the attempt to manipulate the video of the search to create the wrong impression that officers of the agency molested residents at the Epe home of the governor.

It is also not true that the search was an attempt to plant foreign currencies in the home of the former governor,” he added.

No Suspected Case of Coronavirus in Lagos, Says Govt