Bobrisky tells fans to bless him on his birthday

Controversial cross-dresser Bobrisky might have caught the begging bug as he just took to his Instagram page to solicit for funds on his birthday.

The Lagos socialite who is celebrating his birthday today decided to test how cherished he is among his followers by posting his account details on his page.

Oya today is my birthday all my lover around the world  start blessing me. Is my fucking birthday . Incase you do dm me let me thank you. I appreciate people a lot. Love you all 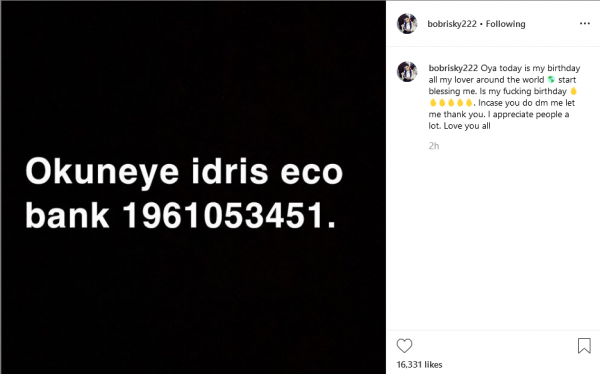 He, however, disabled the comment on the post, probably to stop his haters from taking swipes at him, as some may want to call him out for being broke.

This although would not be the first time Bob would do that. He posted his account number earlier in the month when he announced to his teeming followers his Birthday would come up in the month of August.

Earlier today, a protege of his, James Brown, took to his page to write an emotional message to Bob on his birthday. What actually got the intention of his followers was the manner with which he addressed the socialite, whom he called My Aunty.