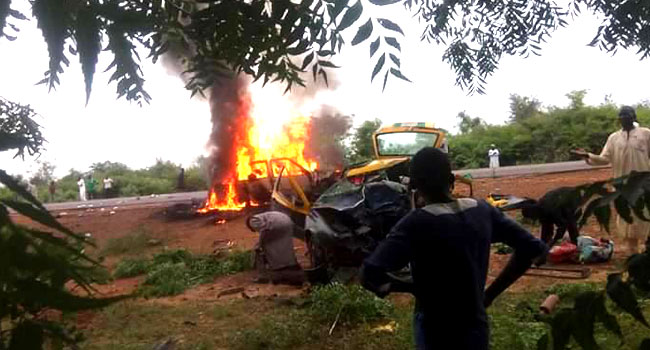 FOURTEEN people have been confirmed death by Police authorities in Jigawa State after two Volkswagen cars collided in Ringim Local Government Area of the state.

In an interview closely monitored by our reporter, the police spokesman of the state, Mr. Abdu Jinjiri told channels Television that the accident occured on Saturday.

While explaining the incident, he said that one of the vehicles took off from kano and was on its way to Gumel Local Government Area while the other took off from Gumel.

Eight people died at the scene of the accident after one of the vehicles was engulfed by fire, he said.

He added that nine others were taken to the Ringim General Hospital, where six were confirmed dead and the three others responding to treatment.

The Command’s spokesman called on commercial and private vehicle drivers to drive carefully and not exceed the speed limits for the highways.