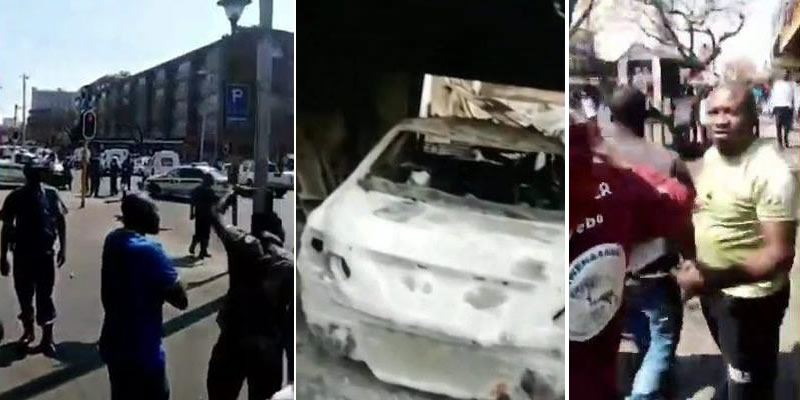 In a statement signed by Head of Africa Affairs, John Tom Leva, on Wednesday in London, United Kingdom, to address “xenophobic anti-foreigners attacks on nationals of other African state”, the group was critical of the rainbow nation’s poor handling of obligations to foreigners.

According to the group, the perpetrators carry out these devilish act with a level of confidence that SA government is sympathetic and conscious of their activities.

The Global Amnesty Watch, however, urged the International Criminal Court (ICC) to hold Ramaphosa liable for the failure of his country’s security agencies to rise up to their responsibility of protecting lives and properties.

The GAW therefore called on the African Union and the United Nations to weigh in, imposing targeted sanctions on the “specific persons that have responsibility for preventing the horrific events of this nature”.

Global Amnesty Watch (GAW), like the rest of the world has watched aghast as some xenophobic South African launched unprovoked attacks on nationals of other countries that are resident in South Africa.

We have taken time to observe these attacks, whose pattern suggest that the perpetrators have a level of confidence that their government is sympathetic to the crimes they are committing against humanity under the guise of taking action against migrants. Our team of researchers have observed patterns that are more disturbing than the attacks themselves.

The attacks are not being carried out randomly by criminals or drug addicts. Almost all the instances involved attacks that were well planned and executed, often involving the participation of entire communities.

There is a pattern of looting and invasion of homes and businesses, which suggests that the xenophobic South Africans behind these attacks had always coveted the assets and property of their victims.

The police and other security agencies in South Africa have practically sided with the xenophobic attackers. Instances where they stayed aloof while Nigerians, Zimbabweans, Malawians and others are killed while in some instances they gave active support to the attackers.

Much as the world labelled these attacks as xenophobic in nature GAW has noted an element of terrorism in the instances where the attackers created videos of their attacks, publish them online and go out of their way in order to cause maximum terror and fear in the heart of migrants.

The response of the South African government, considering the history of xenophobia in that country, has not been encouraging; there is a lethargy on the part of the government in ordering law enforcement to arrest and prosecute offenders. As conspiratorial as it sounds, there are concerns that the South African Government is allowing the attacks so that the jobs and businesses that would be left behind by terrorized migrants (mostly legal and documented migrants) would help to it to reduce the unemployment figures of the country.

Global Amnesty Watch condemns the senseless attacks on Nigerians and citizens of other countries resident in South Africa. The attacks are barbaric and stand against the spirit of Africa integration that generations of visionary continental leaders have been pursuing as exemplified in an organization like the African Union (AU).

To the extent that the South African government allowed the attacks to go on for so long without taking appreciable steps to stop them, we urge the International Criminal Court (ICC) to hold President Cyril Ramaphosa vicariously liable for the failure of his country’s security agencies to rise up to their responsibility of protecting nationals of other countries who are in South Africa.

GAW calls on the AU and the United Nations to weigh in on the situation by imposing targeted sanctions on the specific persons that have responsibility for preventing the horrific events of this nature from happening but failed to prevent them. All African countries are by the same token advised to sever all relations with South Africa until it demonstrates stronger commitment to rein in the murderous population of its nationals. This should include a continent-wide boycott of South African product and services until the country, its government and nationals become responsible.

The Government of Nigeria must immediately begin implementing long term measures towards a large-scale relocation of Nigerian businesses in South Africa to Nigeria since historical records show that these xenophobic attacks have worsened in frequency and intensity. The projection is that the situation will only grow worse over the coming years as South African grapples with their government’s bad choices and the laziness that has prevented them from thriving under the same conditions that migrants became prosperous.

We sympathize with the families that have been bereaved, lost businesses or forced to flee their homes because of the attacks. We encourage such families and victims of the attacks to step forward to document their experiences, which would form the bases of the petition to be sent to the ICC.