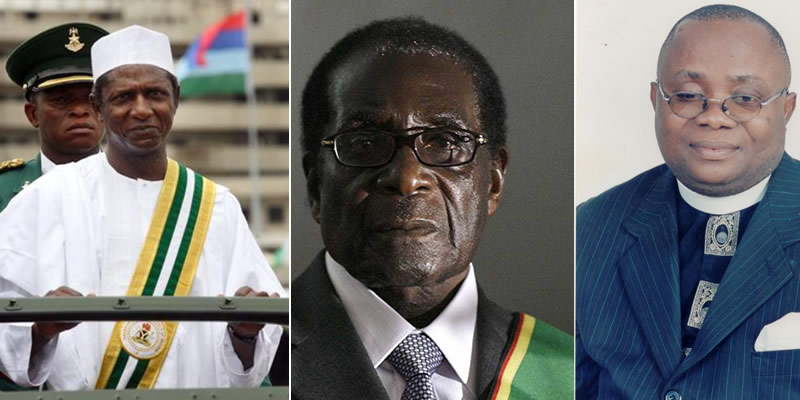 Prophet Ekong Ituen is a Lagos-Based Cleric and Spiritual Leader of Christ Deliverance Ministries CDM who converted and ordained a former Liberian Warlord General Yommie Johnson as an Evangelist in his Ministry and the former Warlord later became a Senator in charge of National Security and Intelligence as he also predicted.

Within Nigeria sighted a story published since 26 May 2016 on Christ Deliverance Ministries Inc’s website where the Cleric warned the people of Zimbabwe that their Founder and President, Mr. Robert Mugabe may give up the ghost after a brief illness. He stated this when some eminent citizens of Zimbabwe visited him in Lagos and his warning made headlines on Concord Newspaper as seen in the picture below.

Ituen, who is known for making accurate predictions that always come to pass had before now predicted the death of two Nigerian Presidents that came to pass, these were late Dr. Nnamdi Azikiwe and Umaru Musa Yar’Adua.

There are better days ahead, Nigerians should not lose hope — Prophet…

Amidst controversy, Robert Mugabe buried in steel coffin encased in…

Also in early 2014, when President Jonathan and ex-President Obasanjo were like a conjugal twins, Prophet Ituen predicted that their relationship will not last as he foresaw a political clash. And went further to tell Nigerians that Jonathan will beg Obasanjo but Obasanjo will be adamant. Today, the rest is history.

Ituen has also urged Nigerians to pray against military intervention, by coming back to power through the window which the politicians have left opened.

Actress Oyebade Adebimpe robbed at a gunpoint, valuables carted away

Recent Prophecies of Prophet Ekong Ituen That came To Pass