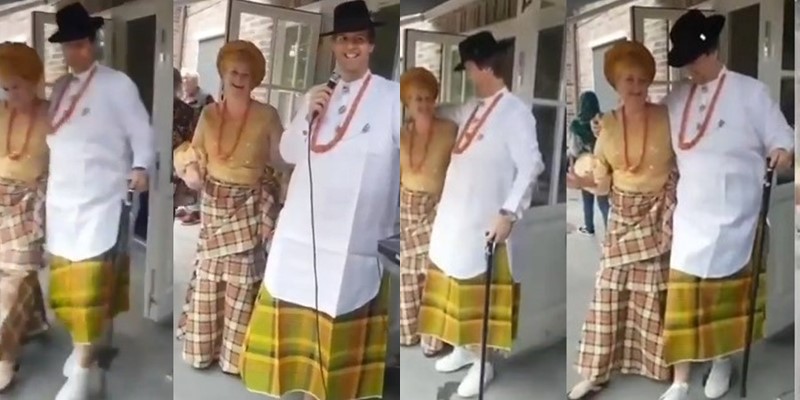 A white couple has endeared many Ngerians after a video of them clad in Nigerian attire and dancing to Burna Boy’s ”Killing them” surfaced online.

The crowd cheered the couple on and the man said it wasn’t planned and the joyful mood is what you get when you invite Nigerians to your party, lol.

Meanwhile, Burna Boy, is a Nigerian Afro-fusion singer and songwriter. Burna rose to prominence in 2012 after releasing the lead single “Like to Party” from his debut studio album, L.I.F.E (2013).

Burna Boy was signed by Aristokrat Record Label in the year 2013. After he released his studio debut album, ‘L.I.F.E’ the album sold 40,000 on the first day of it’s release.

According to Forbes, as of September 2019, Burna Boy’s net worth is estimated to be approximately $3.5 million.

Prostitutes Protest In Kenya, Demand Lubricants And Condoms From The Government

“I am going to audition for BBNaija 2020” – Crossdresser, James Brown tells Venita…