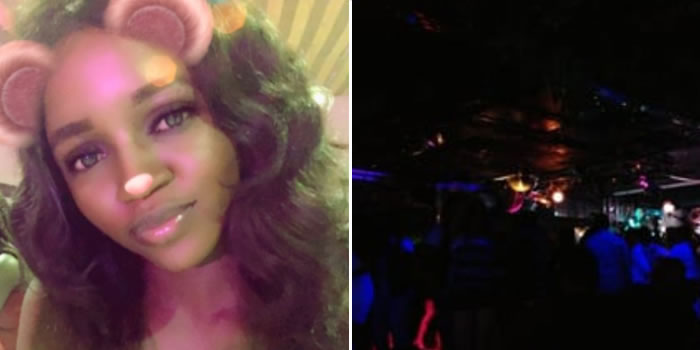 Lady took to her social media page to recount how twitter user Ayo FBI attempted to lure her to his apartment after they met at a bar.

Lady known as Adekemi on social media took to her page to recount how she met Ayo FBI in a club after a friend’s party and his corny attempt to lure her to his apartment.

Read her story below.

So this is what happened! It was on a Friday night, I went to a bar for a colleague’s birthday, I guess Ayo FBI saw me while walking in or something, after a while, most of the people that came for the get together had left then it was just me, the celebrant and one more person. He approached me and asked if I could join him at his table, I declined and told him I came here to celebrate my friend that I can’t leave but no big deal if he joins our table instead. So he went to pick his drink and bag to join us…

After few mins my friend and the other person said they were ready to leave, so I decided to leave as well, then Ayo FBI asked if I could wait that there’s a particular live band that performs and that they’re very cool, and I would like their performance

He said he comes there regularly and all , well that was my first time there so I wanted to see the performance, so I told my friend to leave that i can take care of myself which of course I did!

we started talking, first of all he started with the game of “I think I know you from twitter” well yeah I use twitter but I’m not that popular so no way uncle, then he asked have you heard of “Ayo FBI” on twitter guy I get the whole point, it’s for familiarity jst move on!

I asked why he was alone and he said his friend that was supposed to be there with him canceled or something, I thought he was a decent guy from his look actually! Let’s sha continue. He started saying “he’s a banker but people mostly know him as twitter influencer with 20k salary”, he said again “he supports feminism and respect if a girl says no” and lots of talks like that you know na???

Then we went on to talking about my hair and lips, saying it was my hair that attracted him to me but when he say my lips he got more attracted, well NO biggie, l blushed of course and I thanked me, normal thing!

Onto the next, I was drinking “malt” when he joined my table, he laughed and said why will I be drinking this that I should try what he was having (Origin&Fayrouz), according to him that’s the best blend he tried convincing me to take it but I told him….

I don’t do alcohol you won’t be the first to try to do this just drop it abeg! He dropped it like a gentleman and ordered for smoothies for me! He went on bragging about how often he dashes money out on twitter and away from twitter! He brags a lot I must confess.

After few mins he asked if I have cash and I told him I have just my tfare back home which was just 2k cash cos my place isn’t far from the bar, he asked for it that he’d return when I’m leaving after he uses his atm card, no qualms I gave him the cash…..

I didn’t assume he was just a broke guy bragging about what he doesn’t have or what he can’t afford, I don’t judge people so fast, so I didn’t want to assume he’s a broke guy merely from borrowing 2k cash and using a very horrible phone, gbo gbo screen ti fo tan…..

He was rotating it & all to reply messages, STILL I was like “don’t judge a book by its cover Adekemi” but my instinct was like “Adekemi alawin Ni bobo yi, be going home” I should have just trusted my instinct man! Sha let’s continue

After few mins sha, the live band came on and he said he needs to go use the atm that he likes to spray them he went and yeah the life band started performing, it was actually fascinating I must confess  I was already gbeing my body when Ayo FBI walked in

Nigga started spraying me money, he sha sprayed 3k, at least I have my 2k & 1k extra, I was glad then he asked me this “can you go to club with me? It’s nearby, don’t worry you’ll go home from there in the morning, just clubbing no biggie”

Hmmm, 1. It’s been a while I clubbed 2. I need to know check the club cos of something I’m working on as regards club
3. I can take care of myself
After these thoughts I said okay but I need to eat first, so I texted my mum I won’t be coming hme & that I’m going to club

He told me there’s a restaurant down the club where I can eat( I don’t joke with my night food abeg no matter how late) before we go to the club….

I couldn’t finish the smoothies when he asked us to leave, guess what, he took it and drank it all at a gulp like “ma waste owo mi” and I was just like  really nigga? After few mins we left the bar and we started walking to the bar and guess what he did

He stopped me halfway and asked to kiss me, trying to hold me and stuff. I changed it for him immediately like “alaye let’s know what we are doing” respect yourself please, and I told him if he makes me more uncomfortable I’m taking the closest cab home, talo loshi

Like nigga first of all we were on the road, what decent guy would do that cmon  he apologized that he was only tempted by my lips

We got to the restaurant, when I was ready to make my order I asked him if he was going to eat, he said no, from there I just guessed that this nigga doesn’t have money jare, don’t let me pass my boundary, so I went on to just buy #800 worth of food

How pastor delivered woman ‘tied’ with charm in Ogun

Woman tears Bible passages asking wives to be submissive, uses it to…

Homeless Nigerian man arrested in Cambodia, says he has no job, passport and money

Lady flogs her mother mercilessly after her pastor told her that she’s a witch.