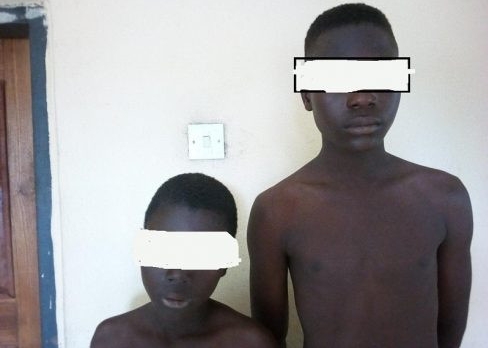 Two young boys identified as Hamisu Usman, 10 and Usman Mas’ud, 14 have confessed that they broke into a shop located at Wadata Area of Lafia Local Government Area of Nasarawa State to steal N100,000.

According to Daily Trust reports, Hamisu disclosed that he needed the money to buy new school sandals as he is moving to a new class in primary school.

“I know the shop, as I have been sent for shopping. When I entered the shop, I picked money in a bag, and while I wanted to come out, my handset fell, and the noise it made, made people nearby to alert the owner, called Anas. He opened the shop and found me” he said.

He further revealed that operatives of the Nigerian Security and Civil Defence Corp (NSCDC) were called to the scene of the incident to rescue them after being beaten and slapped.

Also confessing to the sad act at NSCDC Headquarters in Nasarawa state, Usman said they broke into the shop by 11pm.

” I and Hamisu went to the shop of Anas in Wadata area of Lafia by eleven in the night, he climb a wooden crate to enter shop through the ceiling, while I picked his slippers and hide” he said.

Commenting on the arrest of the two boys, Nasarawa State Commandant of the NSCDC, Mohammed  Fari said the boys spent two days in custody as their parents did not come to bail them. He further revealed that they took in the boys to protect them from those that manhandled them.

“They are juveniles, we rescued and kept them to protect them against those that manhandled them. I call on parents and guardians to discipline their children and ward against breaking the law” he said.