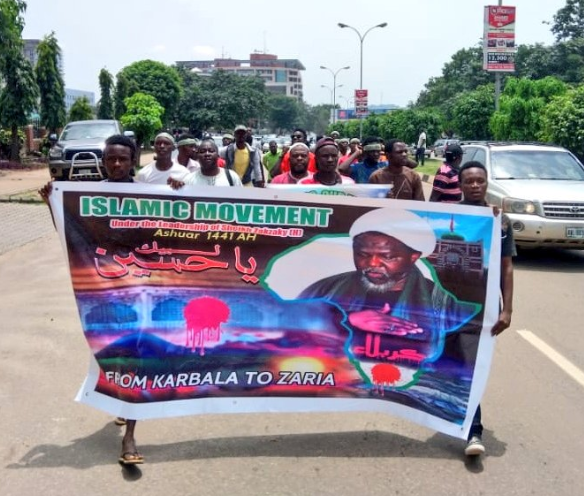 Members of the Islamic Movement of Nigeria popularly known as Shi’ites peacefully stormed the streets of Abuja to protest against the continous detention of their leader by the Federal Government in Maitama, Abuja today, Tuesday, September 24th.

Inspite the proscription of their activities in Nigeria, the protesting Shi’ites demanded for the unconditional release of their leader, Ibrahim El-Zakzaky and his wife, Zeenat.

Reliably, El-Zakzaky has been in detention since December 2015 after members of his sect clashed with men of the Nigerian Army in Zaria, Kaduna state.

After a deadly clash between the group and the Police in July  2019, the activities of the sect were proscribed.

The deadly clash claimed the lives of a Corps member serving with Channels TV, Precious Owolabi and the Deputy Commissioner of Police in charge of Operations, FCT Command, DCP Usman A.K Umar.

In other news, few weeks after the proscription of Shi’ite group by the federal government, the Inspector General of Police has ordered a nationwide clampdown on all identified shi’ites leaders across the country.

Recall that Within Nigeria had earlier reported that the Islamic group were damned for the killing of the Deputy Commissioner of Police in charge of operations, FCT Police Command, Umar Usman and a corps member, Precious Owolabi who serves in PPA at Channels Television in the signal to the operatives dated August 30, 2019.

We are not aware of Osinbajo’s travails ― Senate