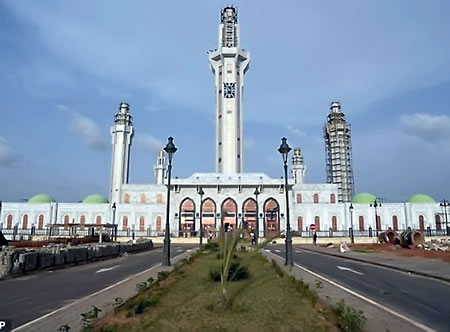 SENEGAL’S influential Mouride Brotherhood will today inaugurate a 30,000-capacity mosque in the capital, Dakar, touted as the largest in West Africa and rivaling its opulent peers in Arab nations.

According to Daily Mail, work on the Massalikul Jinaan (‘The Paths to Paradise’) mosque began a decade ago on a swampy six-hectare (14-acre) site in the poor area of Bopp, on land donated by the government of the 90-percent Muslim nation.

The name is derived from the title of a poem by Sheikh Ahmadou Bamba Mbacke, the 19th-century founder of the Brotherhood, who is revered by followers as a Sufi saint.

Headquartered in the city of Touba, where Bamba is entombed, the movement is a pillar of Senegal’s reputation for religious tolerance.

The Mouride philosophy – the name derives from the Arabic word for ‘one who desires to learn’ – preaches service to humanity in addition to upholding the principles of Islam.

The movement also wields considerable economic and political clout in Senegal and in neighbouring Gambia.

With a Carrara marble exterior and boasting five minarets – the tallest 78 metres (255 feet) high – the mosque has a capacity of 15,000 worshippers inside, and another 15,000 on an outside esplanade.

The Mourides “dominate trade, import-export, agriculture and even the media. The mosque is a symbol of this economic power, which will help reinforce their political and cultural influence,” he said.

The lavish interiors include a gold-leaf dome, giant chandeliers and decorations hand drawn by Moroccan workmen.

“With this jewel, we are on a par with what we see in Arab countries and other places in Africa,” said Mbackiyou Faye, who coordinated the construction work.

The cost exceeded 30 million euros ($33 million), all of which came from donations, he said.

The government has additionally provided 10.5 million euros for lighting, sanitation and road works, according to Infrastructure Minister Oumar Youm.

The mosque is smaller than Casablanca’s Hassan II, which is spread over nine hectares and can accommodate 105,000 worshippers and has a minaret spiraling 210 meters.

Another mosque being built in Algiers is sprawled over nine hectares with a 265-metre minaret. It will be able to accommodate 120,000 people.

The Mourides are one of four important Sufi brotherhoods followed by Senegal’s Muslims, who overwhelmingly practise a moderate version of Islam while following the teachings of local spiritual guides.

Bamba, a peaceful opponent of French colonialism, was exiled by the French authorities to Gabon (1895-1902) and then to Mauritania from 1903 to 1907 before being allowed to return to Senegal, where he was placed under house arrest at his home in the north of the country. He died in 1927.

The mosque will be inaugurated today in the presence of President Macky Sall.

In a related development, France’s oldest mosque, a five-century-old edifice on the Indian Ocean island of Mayotte, is presently being given a facelift.

The white-and-blue prayer hall at the mosque in Tsingoni, used five times a day, is plagued by crumbling ceilings, leaks, giant cracks and damp.

“The humidity, the dust, the lack of ventilation, I can’t stand it. I have developed allergies,” complained Badirou Abdou, a local council representative who has prayed at the mosque since he can remember.

Abdou now worships in a temporary prayer hall one floor above the original, which is getting a much-needed facelift along with the rest of the mosque at a cost of some two million euros ($2.2 million) to the city of Tsingoni and the French state.

The building, perched on an island whose population is 95 percent Muslim, is the oldest working mosque in France and classified as a French Historic Monument since 2016.

“The inscriptions on the side of the mihrab (a niche in the wall that shows the direction in which Muslims should pray) say that the mosque was built in 1538 by the sultan Insa,” said Ambass Ridjali, cultural director of the Tsingoni commune, formerly the island’s royal capital.

The mosque is being repainted, and a new copper dome topped with a star and crescent has just been installed to replace its shattered concrete predecessor, which had been in danger of collapsing.

The work is expected to be completed by the end of 2020.

The design of the mosque shows a strong Swahili influence from the East African coast, said Violaine Bressand, an engineer with Mayotte’s cultural affairs agency.

The holy place, in the meantime, is starting to attract visitors – and cash – to Tsingoni.

“This contributes to the economic development of our territory while also safeguarding the historical aspect of the mosque”, Ridjali said.

Despite the noise, dust and workmen, worshipper Abdillahi Salim continues to use the original prayer hall.

“This is where my father and my grandfather prayed. I do not see myself praying anywhere else,” he said.