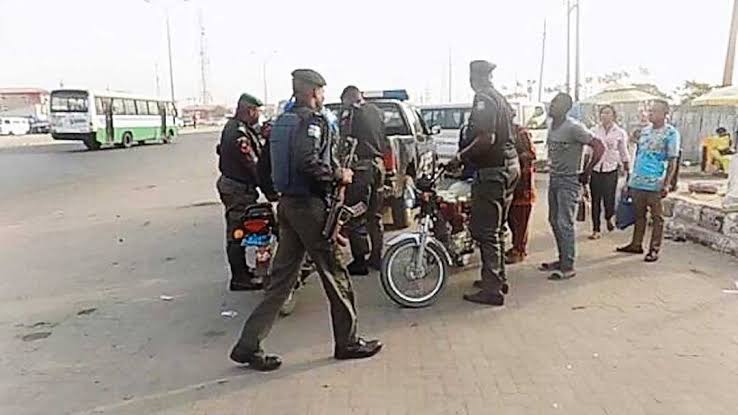 Commercial motorcycle operators in Eket local government area of Akwa Ibom State, early hours of Tuesday, 1 October, launched a reprisal attack on the police in the area for allegedly killing two of their members.

The irate mob set a police patrol van ablaze, even as they placed a mock coffin in front of the police divisional office in Eket.

Sources disclosed that police had earlier last week banned commercial cyclists from operating before 6a.m and beyond 6p.m daily due to criminalities allegedly perpetrated in the area through the use of motorcycles.

It was learnt that the motorcyclists never accepted the order as they continued operating beyond the stipulated period.

It was reported how one of the motorcylists was shot dead on sunday by the police and the corpse has been deposited in the mortuary at Immanuel General Hospital, Eket.

WITHIN NIGERIA gathered that the incident was agravated on Monday when a policeman beat a motorcyclists and he collapsed before being taken to nearby hospital.

While the victim named Udoe died the following night at the course of medical at Immanuel General Hospital , Eket.”

Udoe’s corpse was taken to the area police station as the council chairman Frank Archibong was not available.

When police prevented them from entering their station all the cyclists and the youths regrouped and moved to police checkpoints along James Town road.

Speaking on the incident, the Police Public Relations Officer, SP Odiko McDon told journalistsis that “The restriction order by the state government is not just in Eket, but also in Ikot Ekpene and other troubled areas and the police are merely carrying out the order. We are saddled with the responsibility of implementing the law. We are not using force, so I am not aware of any death, and we would stop at nothing in ensuring that we implement the order. It worked in Ikot Ekpene and today, people are able to sleep with two eyes closed.

“They raised down our Volvo that had a mechanical fault and we have arrested 19 persons in connection with that. We are certain that lots of criminal activities would be curtailed in the area if bikemen are restricted within these hours”.

Pastor Kills His Girlfriend For Refusing To Buy Him A Tricycle

“I waited for 45mins to see her die”, Man who killed girlfriend over alleged…