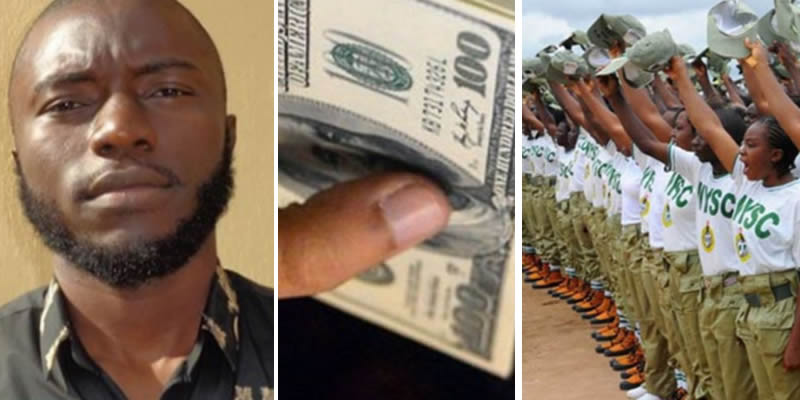 PHOTO: Yahoo Boy convicted during his NYSC Program over $150 fraud

A serving corps member, Samuel Orie alias SCOTT GIBB has been sentenced to one imprisonment by Justice I.N Buba of the Federal High Court, Enugu for impersonating and obtaining the sum of $150 through false pretence.

The convict was arraigned before Enugu Federal High Court by EFCC, Enugu Zonal Office after he was arrested on August 23, 2019 based on intelligence regarding his fraudulent activites.

According to reports, the convict fraudulently presented himself as Scott Gibb, an American contractor travelling around the world and using his email address to wit: [email protected] with the intent to obtain money from unsuspecting victims on the internet.

“He thereby committed an offence contrary to Section 22(3) (b) and punishable under Section 22(4) of the Cybercrimes(Prohibition Prevention)Act 2015.

Orie was convicted by Justice Buba and was ordered to forfeit the sum of $150 and his Techno Camon M phone.

NYSC reacts to video of ex-corps member humiliated by policemen

Meanwhile, a man identified as Adeyemi Eniola Feranmi has been arrested by the Ekiti State Police Command for impersonation, pretence and false identification.

The suspected fraudster was arrested by police officers for defrauding a Corps member and three others by parading himself as a legal practitioner on social media platform, facebook.