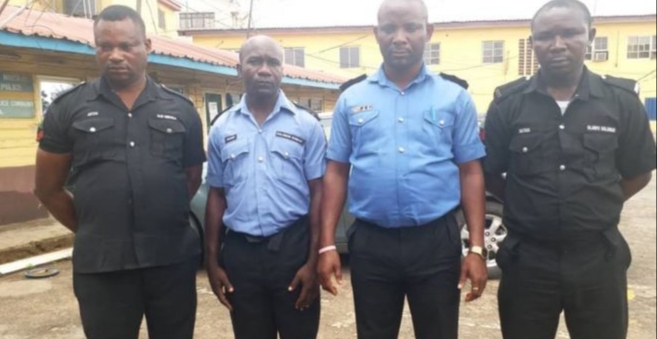 46days after SARS operatives kill disarmed suspects in Lagos, the four police officers responsible for the killings who were once dismissed by the Lagos State Police Command have been reportedly freed following advice by the Directorate of Public Prosecution (DPP).

WITHIN NIGERIA had earlier reported that “a gory video of the extrajudicial killing of robbery suspects by Lagos Special Anti Robbery Squad (SARS) is currently making rounds on social media. According to reports, the incident took place at Igando area of Lagos State, the robbers allegedly stole phone from a prospective customer at gun point after showing interest to buy the victim’s phone on a popular classified Ad website known as Jiji.ng.

The police officers identified as Insp. Fabiyi Omomayara, Sgt. Olaniyi Solomon, Sgt. Solomon Sunday and Cpl. Aliyu Mukaila were quietly freed and the entire public was ignorant of their freedom before it was firstly raised by a twitter user in the early days of October but now confirmed by the families of the victims.

In a statement signed and made available to the media outlets by Dr. Babajide Martins, the Department of Public Prosecution stated clearly that “ After carefully considering the facts in the duplicate case file, this office is of the opinion that there are insufficient facts to establish a prima- facie case of murder or involuntary manslaughter. They, therefore, have no case to answer.”

While reacting to the said position of the Department of Public Prosecution, the families of the victims described the position as an alleged move to sweep the case under the carpet and the killer cops are now roaming freely and boasting that they were untouchable.

The families of the victims made a passionate appeal to Governor Babajide Sanwo-Olu to order a fresh investigation into the matter purposely for justice and fairness.

While addresing reporters on Tuesday, the counsel to the families, Barr. Adesina Ogunlana said, “The truly disturbing legal advice on issue like is, in our humble view, a complete disregard of the onerous responsibilities of the office of the Attorney General and Commissioner for Justice under which the Directorate of Public Prosecutors operates, to see to due protection and promotion of the rights of all souls in the jurisdiction of Lagos State.

We ask the following question: Can the office of the DPP claim ignorance of the filmic expose of the daylight execution of the two victims by these police killers, as to arrive at its present exculpatory advice? .

In the said footage, the two victims were deliberately and clearly executed in cold blood after being apprehended safely by their police killers loudly declaiming that ‘we don’t waste time.”