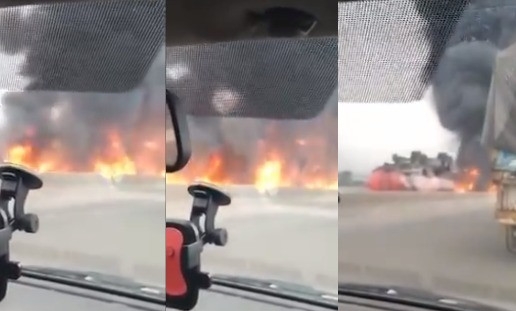 Barely 2 days after fire razed parts of Onitsha market which led to destruction of millions of properties and loss of lives, another petrol tanker is currently on fire along the Lagos-Ibadan Expressway few metres before the Redeeemed Christian Church of God camp ground.

This was disclosed by a Twitter user who uploaded a video captured from the scene of the incident.

WITHIN NIGERIA recalls that the incident, coming barely 48hours after lives were lost following fuel tanker explosion in Upper Iweka and Ochanja market, was said to have occurred around Omaba Phase 2 at the wee hours of Friday.

Lagos conductor lands in court for withdrawing N80,000 with ATM card stolen from…