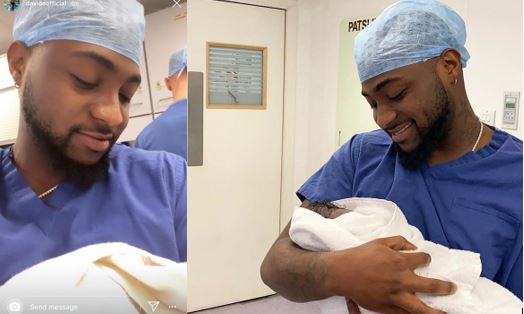 It was a wild jubilation for the families of Adeleke and Rowland as Nigerian music superstar, David Adeleke and his fiancee, Chioma Avril Rowland welcome a bouncing baby boy in the early hours of today.

The happy father and ASSURANCE crooner,  Davido took to his social media pages to share the great news with his fans and loved ones.

He uploaded the beautiful photo he took together with the new bouncing baby boy and revealed his name as shown in the caption below;

This baby boy would be Davido’s third child and only son after he had two lovely girls with different baby mamas.

“So proud of how I handled this year, I fought many battles and wipe…

Till the birth of the new child, Chioma Avril, Davido’s fiancee has been reportedly holed up in London till her delivery time some hours ago.

A super excited new daddy expressed his happiness via his Twitter page;

In a tweet, the singer informed a fan he was in the delivery room with Chioma for the birth of their son. Congratulatory messages have been pouring in for the family as OBO Jnr arrives.