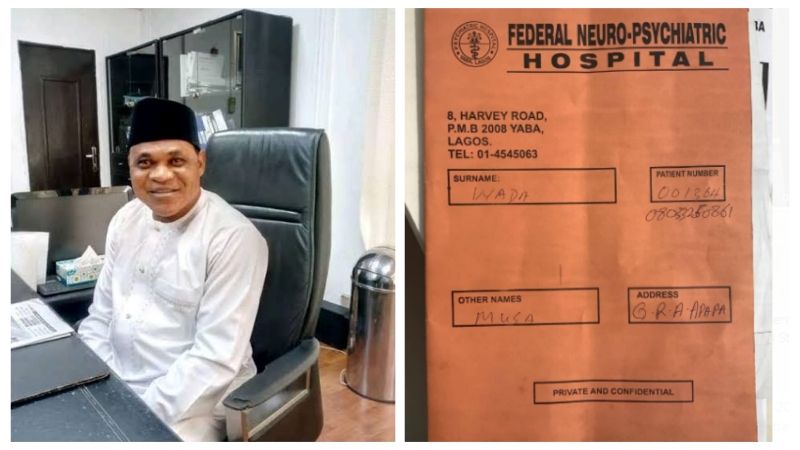 There is tension in the camp of the People’s Democratic Party (PDP), Kogi state over unverified documents depicting the health status of its gubernatorial candidate, Engr. Musa Wada released by Governor Yahaya Bello’s camp.

WITHIN NIGERIA learnt that Engr. Wada was allegedly admitted into the Federal Neuro-psychiatric centre in Yaba, Lagos state in 2005 for alleged delusion and distorted speech. He was allegedy admitted with the patient number 001364 as released by daily independent and nation respectively.

It was gathered from reports that in the build-up to the 2011 elections in Kogi state, documents about the mental state of Capt. Idris Wada from the University College Hospital (UCH), Ibadan surfaced.

According to his purported medical record, Idris Wada mental state on admission was allegedly one of paranoid delusions and auditory hallucinations.

However, it was gathered that no medical record from the UCH has confirmed Idris Wada as a discharged patient of the psychiatric unit.

According to a report published by the Nation Newspaper, an affidavit deposed by Uchechukwu Clement, a lawyer, stated that contrary to claims by Wada on oath under part B, Article E Question 1 “Idris Wada had at a point been adjudged to be of unsound mind”

“That Idris Wada was admitted into the psychiatric unit of the UCH Ibadan on 7th April 1976 with Card No. 399346 on referral from Dr V.O. Anosika of Estate Clinic Group for Schizophrenic illness”

“That Idris Wada’s mental state on admission was one of the paranoid delusions and auditory hallucinations according to his medical record.

“That contrary to Idris Wada depositions, Dr. Oyewumi on 24/4/76 at 11:50 a.m actually confirmed that Idris was psychotic.

“That again contrary to Idris Wada deposition, it was again confirmed at 4 p.m of the same 24/4/76 that Idris Wada was grossly psychotic.

“That his father Haleel Ejiga while attempting to remove him from UCH against medical advice actually disclosed a history of mental illness in the family as a niece of Idris Wada also had it in 1972.

“That on 28/4/76, his father, then of upper Area Court, Makurdi, by a letter of discharge against medical advice actually took Idris Wada Hospital No. 399346 away from University College Hospital, Ibadan contrary to the advice of medical staff.

“That Idris Wada did not undergo full treatment for his psychotic disorder from UCH Ibadan before his father removed him against medical advice.

“That he was not diagnosed as having been of reasonable mind before his father removed him.

“That by his father’s letter of 22nd September 1976, Idris Wada was to return for treatment and observation for a period of 6 months from 19th August 1976.

“That there’s no record that Idris Wada went back for treatment at UCH.

These unverified documents have caused tension within the camp of the People’s Democratic Party (PDP) as some forces within the party are planning for the removal of Engr. Musa Wada as the candidate of the party over his health status.

However, the Independent National Electoral Commission (INEC) has said that during the Kogi governorship election, the commission will accredit all media organisations that meet the threshold of accreditation.

Tragedy as suspected pipeline vandal dies while siphoning fuel from a…