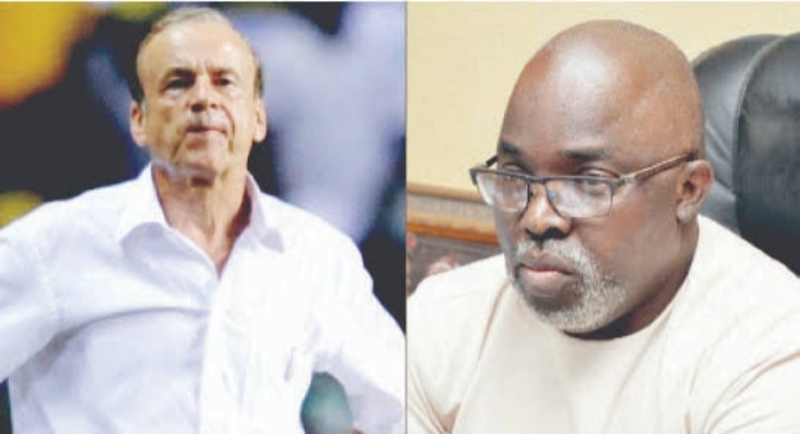 The President of Nigerian Football Federation and First Vice-President of CAF, Amaju Pinnick has disclosed his intention of handling a new contract to Super Eagles manager, Gernot Rohr with a sole condition of including certain clauses in the contract.

The Franco-German tactician, Rohr trained and coached the Super Eagles of Nigeria which made Nigeria to qualify for the 2018 World Cup and winning Bronze at the 2019 African Cup of Nations.

His contract is due for renewal in June 2020, and Rohr has revealed he isn’t short of job offers from other national sides in Africa, but Pinnick, recently cleared of corruption charges by an Abuja High Court has revealed he will like Rohr to be more involved in the Nigerian league.

‘We don’t have any issue with him right now,” Pinnick said in an interview with channels Television.

”The truth is contracts are classified documents but one thing I know that we are going to pass on to him is to strengthen the clauses that domesticate Gernot himself in Nigeria and domestic him to our leagues, that’s just it.

”He needs to go round, watch some of the leagues, we are not saying take a player from here and bring him to the Super Eagles immediately”.

“We have some challenges with meeting up with some of FIFA’s demands.

“They(FIFA) have been magnanimous with us but we need more training sites and realistically it will be very tough for us to meet this.”

Davido and and his lover, Chioma celebrate their son, Ifeanyi as he marks…