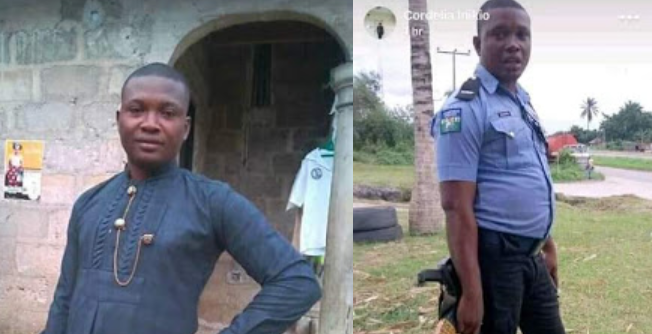 Tragedy hits the family of a Nigerian police officer as the yet-to-be identified officer lost his life barely weeks to his wedding.

WITHIN NIGERIA learnt that the police officer was killed in an accident while on duty.
According to a friend identified as Nwachukwu Nnenna who shared the picture of the deceased on he facebook timeline, the deceased was set to wed on December 15th, 2019.

“To think that you were in my office few days to ur demise, I told you to hold on for some secs let me tidy up my table but then you left in a hurry..and you told me you will come back,you said you were preparing for ur wedding coming up on the 15th of December.2019 only for me to hear that you re dead…I still couldn’t believe it until today when ur signal of “Death while in service” came to my table,I became shattered…R.I.P my good friend.’ she wrote.

In other news, a policeman during the weekend, shot his wife dead at the Ikoyi Prison barracks, Lagos, during a quarrel.

The policeman with an unknown identity was said to have thereafter, shot himself in the head and died on the spot