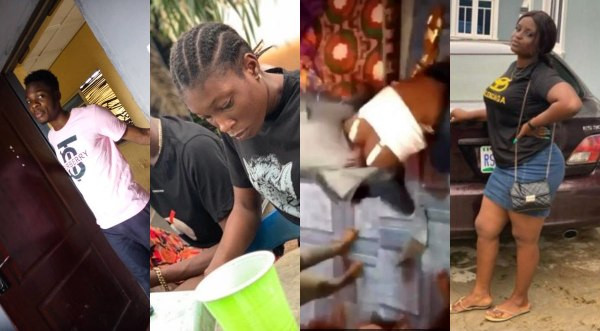 It was a disgraceful show of physical and muscular muscle at the Federal University of Technology, Akure (FUTA) as some students ganged up to molest, physically abuse and beat up a 100-level female student of the institution.

The 100-student of Ecotourism and Wildlife Management student of the Federal University of Technology, Akure identified as BOLU was severely injured, beaten, molested and currently at the hospital receiving medical treatments.

This shameful incident was made known to the public through a heartbreaking video that emerged on social media platforms that depicts one of the cruelest ways human beings could ever be treated.

Inside the sad but rude video, the 100-level student who has been identified with her first name as BOLU can be seen cornered inside a room and was surrounded by four girls and a young man while one of the students also blocked the only means of escape.

They can be seen aggressively commanding her to kneel down as they all held cables, mop sticks and ended up beating her with the cables and mop sticks after she was slapped repeatedly by the only male student there for disobeying their orders.

The video of the assault that surfaced online lasted for two minutes and there was a warning issued to 100 level students to caution their tongues.

WITHIN NIGERIA gathered that the 100-level student identified as Bolu had issues with one of the female bullies who reported the issue to her school father who later led the assault on Bolu.

Many Nigerians have reacted angrily to the assault and demanded for the abusers to be found and punished accordingly.

Inside the video of the assault that remains a rude shock to many, the boy is seen slapping the girl multiples times and flogging her with a cable, allegedly because she disrespected his school daughter.

Inspite of the apprehension of the bullies by security operatives, another video shows students of the institution demanding for the boy when they arrived at his hostel. A FUTA security van can also be seen in front of the building.

“Give me that boy abeg. Na that boy I want,” rather sad and furious students demand.

WITHIN NIGERIA learnt that the young man who led the assault and one of the girls involved in the assault have been arrested and currently in school’s police post.

Inspite of the arrest and detention, a mob of angry students are reportedly waiting outside the police station to see how the case would be drawn to meaningful conclusions.

The FUTA school father and his school daughter who ganged up with others to beat up a 100 level student have been arrested and were filmed inside the school’s police post.

Students can be heard screaming angrily at the bullies in the background of the video that shows the culprits inside the station.

“I’ll kill you myself,” a male voice is heard saying to the culprits.

WITHIN NIGERIA further learnt that the culprits will also be facing the University’s panel by 9a.m today November 17 and there is possibility that they might be expelled over the assault which was captured in the viral video.

Tragedy as suspected pipeline vandal dies while siphoning fuel from a…