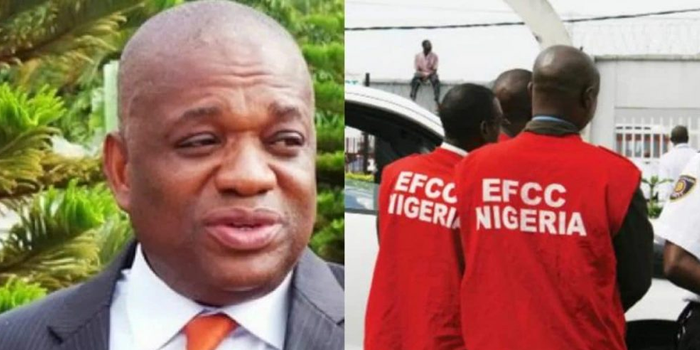 The Federal High Court in Lagos has found a former Abia State Governor, Orji Uzor Kalu, and two others guilty of N7.65bn fraud. Recall that the Economic and Financial Crimes Commission (EFCC) prosecuted Kalu and a former Commissioner for Finance in the state, Ude Udeogo for fraud. They also charged Kalu alongside his company, Slok […]

The Federal High Court in Lagos has found a former Abia State Governor, Orji Uzor Kalu, and two others guilty of N7.65bn fraud.

Recall that the Economic and Financial Crimes Commission (EFCC) prosecuted Kalu and a former Commissioner for Finance in the state, Ude Udeogo for fraud.

They also charged Kalu alongside his company, Slok Nig. Ltd. In the charge brought against the defendants, the EFCC alleged that they committed the alleged offences between August 2001 and October 2005.

The current APC Senator was subsequently sentenced to a maximum sentence of 12 years imprisonment for N7.65bn fraud, among other multiple sentences ranging from 3 years to 5 years on 27 counts.

It said that Kalu utilised his company’s account to retain N200 million in First Inland bank (now First City Monument Bank). The commission claimed that the sum formed part of funds illegally derived from the coffers of the Abia State Government.

In one of the counts, Kalu’s company (Slok Nig. Ltd.) and one Emeka Abone said to be at large, were alleged to have retained in the company’s account, the sum of N200 million on behalf of the ex-governor.

In counts one to 10, the defendants were alleged to have retained about N2.5 billion belonging to the Abia. According to Punch, after his sentencing, Kalu was seen asking prison warders,

“where are you taking us to?”.

Kalu, who is the Senate Chief Whip also begged the prison warders not to handcuff him in public, the report stated.

“Where are you taking us to now? Please don’t handcuff me. I will follow you.”

Kalu’s associate, Udeogu, was sentenced to 10 years in prison while the company which was used in perpetrating the fraud, Slok Limited, was ordered to be wound up by Justice Idris Mohammed.

The EFCC said that the defendants diverted over N7.1 billion from Abia government’s treasury during Kalu’s tenure as the governor, in contravention of Sections 15(6), 16 and 21 of the Money Laundering (Prohibition) Act, 2005.

The commission said that the offences also contravene the provisions of the Money Laundering Act of 1995 as amended.