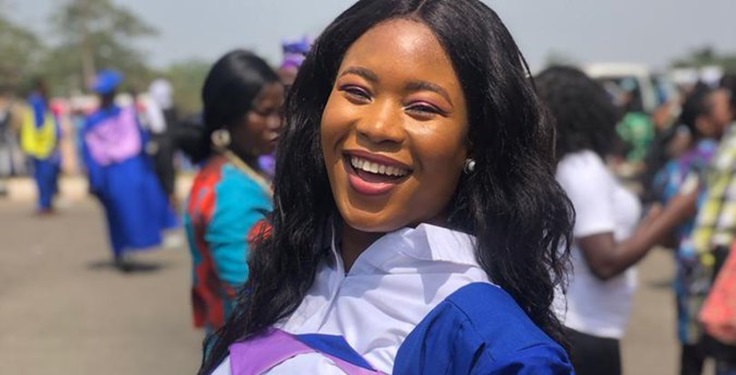 OAP rejoices after girl whom he helped pay UTME Fee years ago, graduates with a first class

Temisan Okomi, a popular Classic FM presenter, has narrated how a young waitress he bought a jamb form for, some years back, invited him for her convocation fours years later.

Recounting his encounter with the girl, Okomi, said he met the girl for the first time at a bar, at the time, she was only 17-year-old,  serving as a waitress at the bar, he then decided to ask why she isn’t in school, and as expected, her story was that there was no money to purchase JAMB and SSCE forms.

Touched by the young girl’s story, he gave her some money  to purchase a JAMB form after she agreed to go to school and drop her job as a waitress , And years later, the girl returned as a first class graduate.

Graduated from FUTA with 1st-Class honours & a degree in Physiology…

…ladies & gentlemen, I present to you, my friend (now) and light:

Below is the story he shared, before sharing her photo today.

Popular OAP, Vimbai refuses to work with D’Banj till he clears his…

A few years ago, I was drinking at this joint I normally drink at in G.R.A when this young waitress served. Looked all of 17 & it was quite late. I was a bit bothered. She looked way too young. So I asked her. She was 17. Pretty young girl…

…I could see her immediate future at that joint, with pervy old men like me drinking there, so I asked her why she wasn’t in school. Familiar tale of no money so she was waiting tables until she could save up to buy forms for SSCE & JAMB. I don’t remember how much it was…

..but I asked her: “If you get money for these forms, you will stop doing this job?” She said; “Yes.” So I dipped me hands & pulled out my lean stash. Gave her the loot & told her she could quit. I don’t do appreciation. I don’t know how to handle it.

She calls me up the next day & her mom gets on the phone & starts praying for me. Truly embarrassing stuff. That was the last time I spoke with her or her mom. Fast forward to 10 minutes ago. She just called me. Said she lost my card but her mom just found it.

She is doing her convocation on Friday. Ladies & gents; I’m flummoxed. Her name is Feyi & I had forgotten about her. Truthfully, I don’t even recall her face again.

She is a graduate.