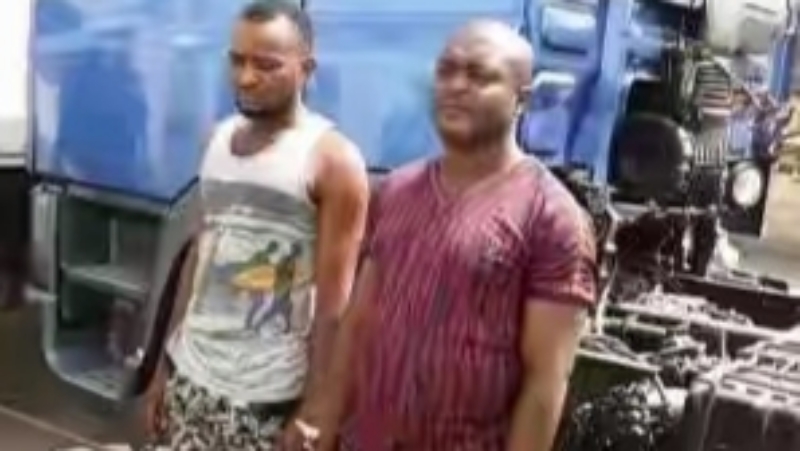 Men of Lagos State Police Command have arrested two members of a gang for allegedly hijacking a truck carrying 40,000 litres of petrol.

The suspects identified as 37-year-old Charles Obilomo and 35-year-old Osita Onyeka were arrested by the police while four other members of the gang escaped with bullet wounds.

According to reports, four members of the gang tried to hijack the DAF truck by intercepting the driver at a bad spot on the Mile-2 Oshodi expressway on December 28.

The truck’s driver, 42-year-old Muhammadu Mande and his 34-year-old conductor Lawal Usman were reportedly kept in another car with four other members of the gang at gun point and were heading to an unknown destination before they were intercepted by a police patrol team at Itire.

While reacting to the incident, the Police Public Relations in the state, Bala Elkana disclosed that the arrest was effected after police operatives from Itire Division led by the Divisional Police Officer, SP Barkfur Kromkyes were tipped off by a reliable source.

“The two suspects in police custody, Charles Obllomo and Osita Onyeka took possession of the truck. The driver and his conductor were sandwiched by the four men in military uniform in the Toyota Corolla. The truck was driving behind the Toyota Corolla and heading to an unknown destination before it was intercepted by the Police.

“According to the driver, he initially thought the hijackers were military men on stop and search duty until they started beating him and his conductor and  threatened to kill them if they refuse to follow their orders. The two suspects were arrested in the truck and taken to the station. The four suspects in military uniforms escaped with bullet wounds after a fierce battle with the police. The truck and the Toyota Corolla were recovered and moved to the police station.

“Two pairs of vehicle plate numbers and military caps were recovered in the Corolla. The truck containing the PMS was handed over to the owner, Sani Samaila.”

Viktoh reacts to claim that Olamide used his destiny