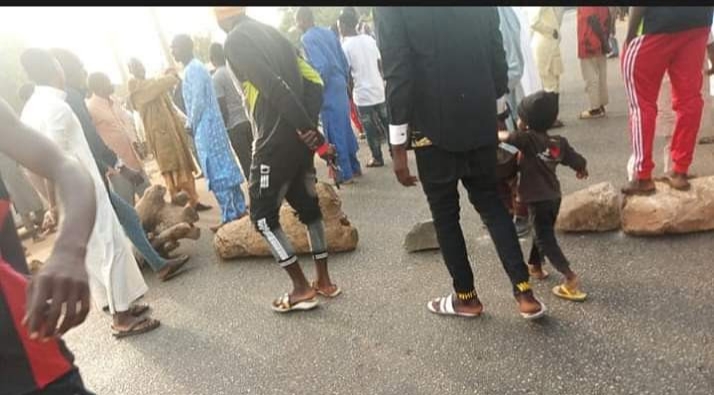 Following incessant kidnappings in Adamawa State, the federal highway linking Girei community to Yola, the capital of Adamawa and other parts of the state was blocked by hundreds of Adamawa youths on Tuesday.

WITHIN NIGERIA learnt that many travellers and motorists were left stranded by youths who hail from Girei Local Government Area.

The angry youths promised that only authorities can make them open the road and these authorities either the Governor or Commissioner of Police must address them and commit to addresing the menace.

While speaking on the matter, the spokesperson of the youth identified as Saidu Hamman-Girei said that recently about 10 persons in the community lost their lives to kidnappers.

“But what we are hearing now is that, there is an order from the police headquarters that the suspects be released,” he alleged.

He said that between N60 million to N70 million had also been paid as ransom to kidnappers.

“We mobilised and supported the security in arresting about 11 suspects with pieces of incriminating evidence. We want the Commissioner of Police to come and tell us why, because serious tension is brewing here. I had to intervene yesterday to stop youths from burning down Girei Police Station,’’ Mr Hamman-Girei said.