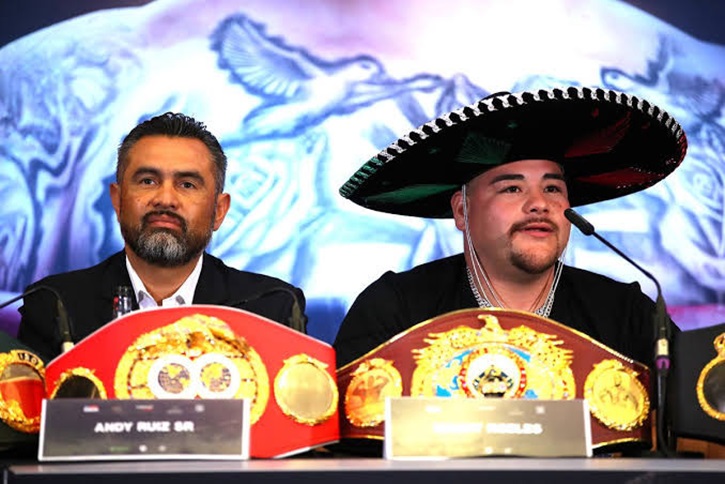 One month after losing to Anthony Joshua, Andy Ruiz Jr. sacks his coach Manny Robles, who helped him to defeat Joshua in June last year.

Robles coached Ruiz and helped him defeat the odds to beat Joshua in June 2019 before Joshua came back to defeat the Mexican-American six months later in Riyadh, Saudi Arabia.

Now a month after Ruiz’ defeat, Robles has been sacked by Ruiz as he prepares to mount a come back in 2020, but Robles has blasted Ruiz saying he refused to listen to him or his dad after winning the avyweight belts from Joshua and his stubbornness eventually led to his loss six months later.

Speaking to ESPN, he added that the relationship between him and Ruiz was never going to work going forward because Ruiz ‘wasn’t listening’.

‘I’ve seen it coming, I’ll be honest with you,’ he said. ‘Andy was just doing whatever the hell he wanted to do. The dad, obviously with him being the manager, he just had no control over his son. None of us had control of him, for that matter.

Prince Charles: Anthony Joshua put self in isolation after the British…

‘Fortunately for me, Andy took the blame on himself and didn’t sit there like a majority of fighters and blame the coach.’..

Robles said the decision was taken by the fighter’s promoter Al Haymon to give him a fresh start.

‘They apparently told them that they didn’t want the same thing to repeat itself again,’ Robles continued.

Speaking after his one-sided loss to Joshua in December, Ruiz said his emotional victory over his rival last year had put him on cloud nine ..

‘I think I ate everything… EVERYTHING… that’s why I gained so much weight,’ he said…
I was having too much fun, I was celebrating too much. Even out of shape, even the way that I was training back and forth (between Mexico and California)… f******, I did pretty good, dude! I did pretty good! But, I wish I had taken it more serious.’