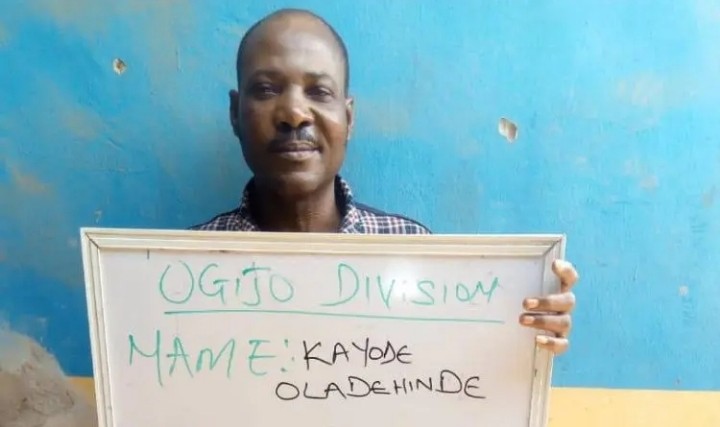 One Mr Kayode Oladeinde, a resident of Olope street Ogijo, has been arrested by the Ogun State Police Command for allegedly impregnating his stepdaughter, a 13-year-old girl.

The Ogun State Police Spokesperson, Abimbola Oyeyemi, on Saturday said the 50-year-old Oladeinde was arrested following a report by his wife at the Ogijo police station, in Obafemi Owode Local Government Area of the state.

WITHIN NIGERIA learnt that the wife, who had the girl with her former husband got to know about the incident when her daughter confessed that it was Oladeinde who had unlawful carnal knowledge of her.

While being interrogated, Oyeyemi reported Oladeinde as being dumbfounded, asking the mother and the girl to forgive him.

According to Oyeyemi, Oladeinde’s wife informed the police that her daughter informed her on February 4 that the suspect recently forcefully defiled her as a result of which she got pregnant.

The woman added that her husband gave some drugs to the young girl, in an attempt to terminate the pregnancy and that it resulted into serious bleeding.

“On the strength of the report, the DPO Ogijo division CSP Suleiman Muhammad detailed his detectives to the suspect’s residence where he was arrested,” Oyeyemi confirmed.

‘Why I Date Older Men. My Lover Is 17 Years Older Than Me’, Actress Cynthia Shalom speaks