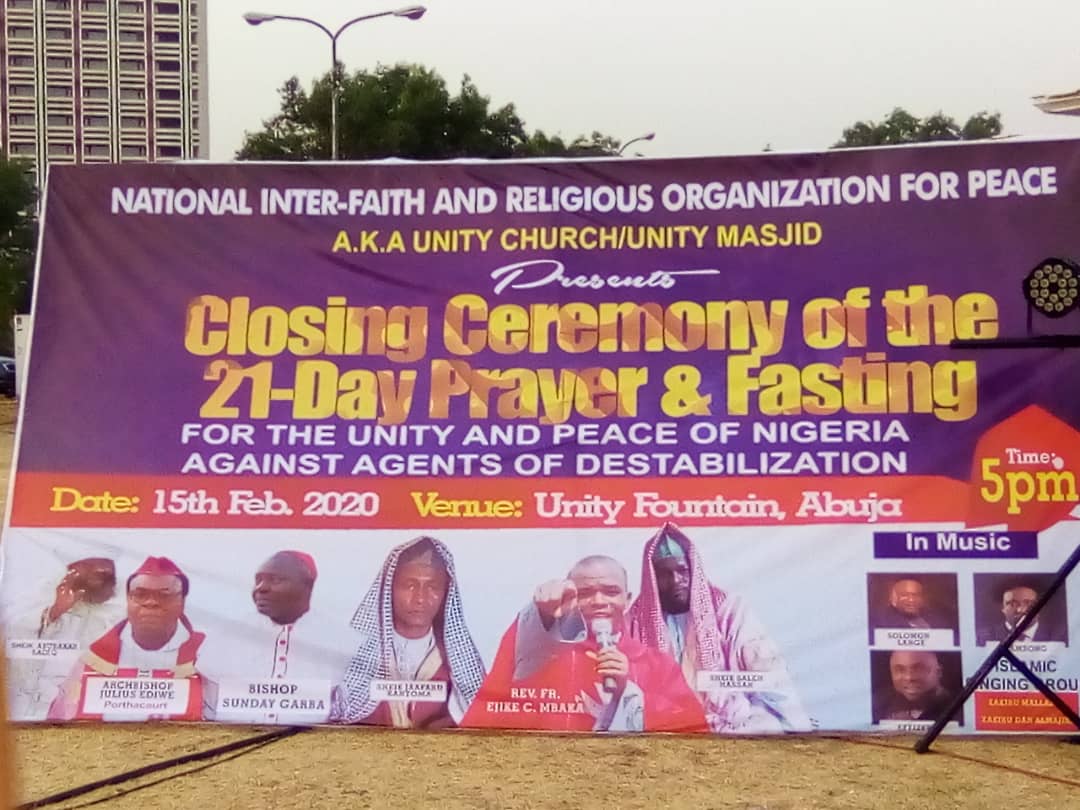 The National Inter-Faith and Religious Organization for Peace, NIFROP has called on religious leaders leaders in the country to ignore the politics of hate and bitterness and embrace peace and unity of the country.

The interfaith group led by religious leaders from the Muslim and Christian communities in the country, at the grand finale of of a 21-day fasting and prayer session over the weekend assured that insurgency will not lead Nigeria into war.

Bishop Sunday Garuba, National Coordinator of the National Inter-Faith and Religious Organization for Peace, in his address said the coming on board of President Muhammadu Buhari was indeed an act of God because Nigeria was indeed on the brink of imminent collapse with the activities of those that have ganged up against the destinies of over 180 million Nigerians.

According to him, Nigeria was bleeding at the time, so much that there was an urgent need for a heavenly intervention by the most high God.

He said the group prayed and fasted for God’s intervention and he indeed intervened by giving the country a trustworthy and reliable leader like President Muhammadu Buhari.

He said, ”It did not end there. There were indeed revelations that the forces of darkness would rise against him in his quest to make Nigeria better and true to the revelations they indeed rose against him. And since then, we have been praying and fasting on his behalf for God to continue to protect him and give him the wisdom to lead with the fear of God and the interest of the people at heart”.

He also warned that the attempt by political agents of darkness to bring back another round of killings in the North East, especially Borno State, necessitated the need for us to come together as brethren to pray and call on God.

”The killing of the CAN President of Michika and other brethren, students and innocent souls that were instigated by some criminal elements have prompted us not to only pray in the spirit but to rise with our loud voices to heaven and call on God to rise for the sake of President Buhari to put these agents of darkness to shame.

”Brethren, on this grand finale, we can say that God is indeed on the throne with the avalanche of revelations that have reached us. We are glad we undertook this task on behalf of President Muhammadu Buhari and Nigeria at large. The composition of this gathering alone is an indication that God loves Nigeria and that indeed Christians and Muslims can come together under one roof for the common good of Nigeria.

”For over 20 days, we have been praying and fasting. This period has seen countless revelations from God. By the authority of God that I represent, I announce that God is indeed rebuilding Nigeria.

”God is about descending heavily on those that have conspired in times past against Nigeria, and those plotting against President Muhammadu Buhari. God has sent destruction to their households. He has promised to bring shame to every one of them in the business of the soliciting for the destruction of Nigeria. God has promised to go after them one after the other wherever they are on this planet for the earth is the lord and its fullness thereof.

”I make bold to make the pronouncement that should those that have gathered against our President and country not repent from their sins, there is no way they would escape the wrath of God for God is with President Muhammadu Buhari, and He is going to defeat all the enemies of Nigeria before the end of the year.

”I also wish to use this medium to call on the Christian Association of Nigeria (CAN), the Pentecostal Fellowship of Nigeria (PFN) and other religious organizations to ignore the politics of hate and bitterness and embrace the unity of Nigeria so that God will help us to defeat the evil ones”, Garuba said.

Also at the event, a Muslim cleric, Sheik Abubakar Sadiq, who led other clerics called on Nigerians to

embrace one another and live in peace if we are desirous of experiencing peace and unity in Nigeria, adding that no human society can thrive in the absence of peace and tranquility.

He said the prayers and fasting programme came at the time when Nigeria has witnessed unprecedented politically sponsored violence across the country.

”Some religious organizations have also taken advantage of the situation to pitch Muslims and Christians against themselves.

”We are glad that this programme has indeed revealed that Christian and Muslims are the same, and this much has been exhibited throughout the duration of this programme.

”I am also using this medium to apologize to President Muhammadu Buhari on behalf of the good people of Borno State for the show of shame that was politically motivated by those whose hands have been soiled with the blood of innocent people that have lost their lives in the Boko Haram/ISWAP conflict in North-East Nigeria.

Abacha Loot: Buhari Given 7 Days To Disclose How Recovered Funds Were Spent Since 1999

Immigration boss appreciates Allah for giving him the opportunity to…