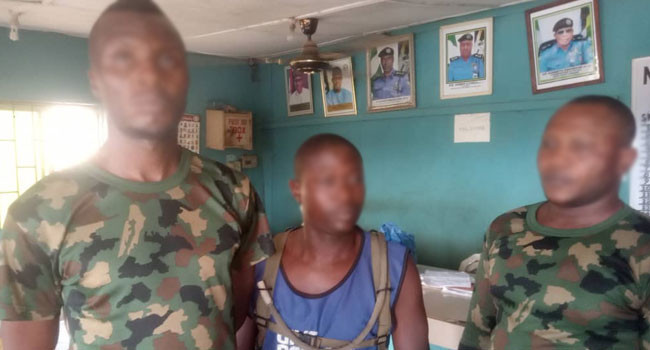 Three men wearing Army camouflage have been arrested by men of the Ogun state police command during a routine patrol on Friday, March 13 in Agbado area of the state.

WITHIN NIGERIA learnt that the suspects identified as Jacob Onebi m’ 36, Olabode Oluwaseun m’ 35, and Olanrewaju Adebayo m 33 were arrested on charges of impersonating soldiers following series of reports from members of the public about their illegal activities in the area.

Reacting to the incident, the Police Public Relations in the state, DSP Abimbola Oyeyemi disclosed that the suspects initially claimed to be officers of 174 Battalion Ikorodu but confessed to being dismissed after further investigation was carried out.

On further investigation, two amongst them confessed to having been dismissed from the Nigerian army a long time ago while the third happened to be their friend who was co-opted into their nefarious activities.

One dead, others injured as hoodlums clash in Ogun