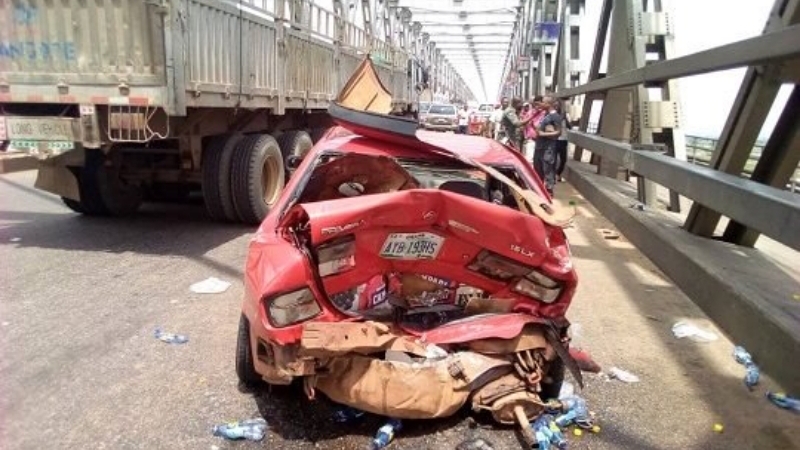 Tragedy as no fewer than five vehicles reportedly collided at the River Niger bridge in Onitsha, Anambra State.

WITHIN NIGERIA learnt that the accident, which occurred around 10.40am involved a Toyota Sienna, Hilux, Hiace, Nissan Primera and a tricycle with a total of fourteen passengers on board.

According to The Nation report, the driver of the Sienna car rammed into the Nissan Primera after it lost control, hitting the Hiace bus, the Hillux and the tricycle respectively.

An eyewitness told newsmen that some of the passengers sustained varying degrees of injury while the primera was badly damaged.

He said that a total of 14 persons were involved in the crash, but said no death was recorded.

He said, “The crash occurred after the brakes of the Toyota Sienna with registration number AKD960XY failed.

Anigbo said the injured were taken to the hospital by sympathizers before the arrival of the FRSC rescue team from Onitsha Unit Command.

“The Sector Commander Federal Road Safety Corps, Anambra State, Andrew A. Kumapayi warns drivers against driving above stipulated speed limits, and tricycle riders from operating on the expressway, as this is a direct violation of the Law.

“He also reiterates the importance of ensuring that vehicles are checked and serviced regularly, especially the breaking systems, before embarking on any trip,” he added