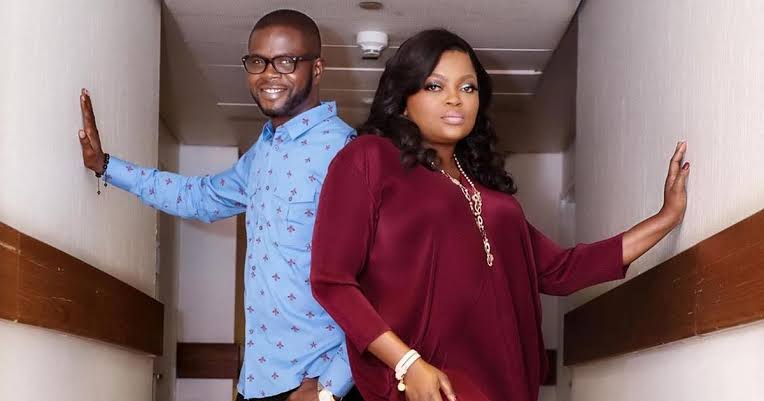 Nollywood actress Funke Akindele and her husband AbdulRasheed Bello have been convicted and fined N100,000 each by an Ogba Magistrate Court for flaunting the Lagos State Infectious Disease (Emergency Prevention) Regulation 2020.

Delivering judgment after the couple pleaded guilty, Magistrate Y.O. Aje-Afunwa ordered the defendanta to pay N100,000 naira each as fine.

The magistrate also held that the couple must serve 14 days community service and thereafter to observe period of isolation.

The couple who were arraigned before Magistrate Aje Afunwa pleaded guilty to the one count charge brought against them by the Attorney General of Lagos State, Moyosore Onigbanjo, SAN.

Onigbanjo told the court that Funke and her husband Bello, flouted the directive of the Lagos state Governor when they gathered more than 20 people at their Lekki home.

The charge reads: ‘That you, Funke Akindele, Abdul Rasheed Bello on the 4th day of April, 2020 at 9,Gbadamosl Close, Amen Estate, lbeju Lekki in the Lagos Magisterial District gathered at the aforementioned address with over twenty persons contrary to the social distancing directives of Mr Governor of Lagos State made pursuant to Regulation 8(1)(a) & (b) and 17(1)“) of the Lagos State Infectious Disease(Emergency Prevention)Regulation 2020 and thereby committed an offence punishable under Section 58 Public Health Law Cap P16 Vol.9 Laws of Lagos State, 2015.’

The couple who were represented by their lawyer, Abayomi Alagbada however pleaded for leniency after pleading guilty to the charge.

Alagbada said : I plead for leniency on the following grounds; both of them are first offenders, they are respectable members of society and have two young children”.

Following the defendants guilty plea, Onigbanjo asked the court to sentence them accordingly.

After taking their plea, Magistrate Aje-Afunwa stood the matter down for 30 minutes and went into her chamber.