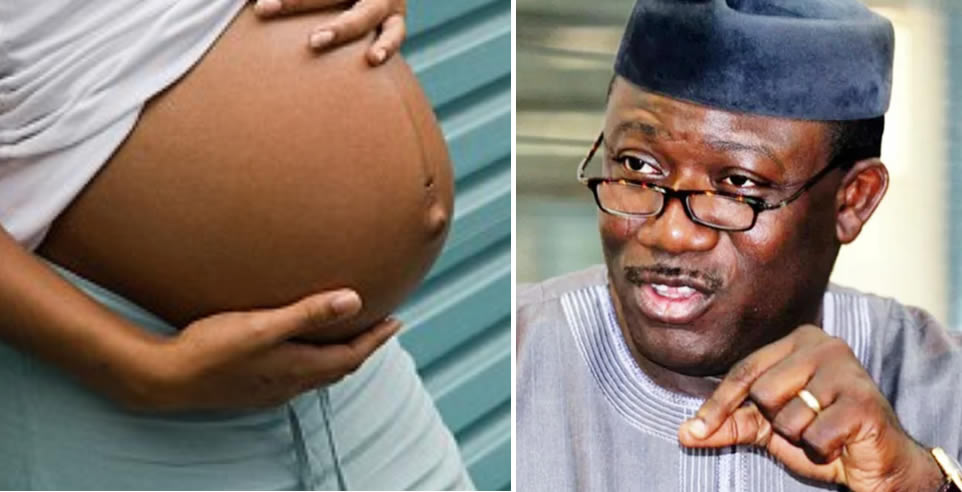 Addressing a press conference in Ado Ekiti on Saturday, the governor disclosed that the woman is Community Health Worker with Lagos State, who sneaked into Ekiti State in spite of the lockdown.

He said the woman was at a state Comprehensive Primary Healthcare facility while in active labour on Monday April 13, 2020.

According to the governor, “After a prolonged labour with fatal distress, she was referred to a teaching hospital but decided to go to a private hospital instead.

“A caesarean section was performed on the patient and the baby was delivered safely. However, she suffered a cardiac arrest and was referred to the Federal Teaching Hospital Ido Ekiti where she is currently unconscious.

“The suspicion of COVID-19 infection and subsequent testing was at the Federal Tertiary institution”.

The State COVID-19 Taskforce, according to the governor has already commenced contact tracing of the new case, saying “as at this morning, we have over 30 primary contacts on our list already.

“The baby is alive and under surveillance while the private clinic has been sealed off and medical personnel who interacted with this case during her obstetrics and gynaecology emergency have been contacted and put in self isolation.

“As at today, Ekiti State has had 29 suspected cases, two confirmed cases, and 49 contact tracing persons of interest before this new case. Thankfully, all the contacts traced have not shown any symptoms of infection.

“This unfortunate incident underscores the reasoning behind our emphasis on protecting Ekiti State from an outbreak of the pandemic by my directive of total lockdown of movement.

The governor said the infidelity of the people and the security personnel enabled this patient to gain access to our state even during a boundary shut down.

This he said put the lives of so many people at risk, and the state under the dreaded possibility of community infection.

Fayemi said the government may have to consider further extension of the lockdown at least until all possible direct and indirect contacts of the woman have been traced and placed in self-isolation as minimum period of incubation is 14 days for every new infection.

He noted that the three cases so far recorded in Ekiti State were from people who contacted it elsewhere but incubated and manifested while they were within our state.

“This underscore the need for every one of us to respect and accept the lockdown order and principles of social distancing.

“Reports of total disregard of the preventive directives especially at our border towns is very discouraging.

“The wellbeing and protection of Ekiti-kete is my priority and these measures were introduced to keep everyone safe and we will not hesitate to enforce and punish further violations of these directives in the collective interest of the State and its residents.

“We are fully aware that such measures will cause some hardship and inconvenience to many citizens.

“But this is a matter of life and death, if we look at the dreadful daily toll of deaths in some countries and even the increasing rate of the virus in Nigeria.’’

He thanked the Grand Patron the Resources Mobilisation Committee, Aare Afe Babalola, Chief ‘Wole Olanipekun and all others who have channelled their resources to fight the coronavirus in the state.