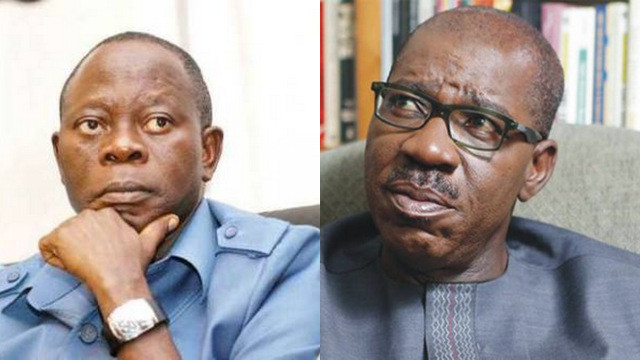 The National Chairman of the All Progressives Congress (APC), Adams Oshiomhole has been accused of ‘spitting on the graves’ of those who died from Coronavirus by the Edo State Government.

Secretary to Edo State Government Osarodion Ogie alleged that the APC Chairman held a political gathering in Benin in spite of a ban on public gathering following the outbreak of Coronavirus.

Ogie who insisted that Oshiomhole’s action showed he has no regard for President Muhammadu Buhari and the collective efforts of the various agencies of government to protect and safeguard Nigerians in these dire times, urged security agencies to investigate the use of their men for the gathering they described as an “illegal assignment”.

The statement released on Friday May 1, reads;

“The coronavirus pandemic has not only shut the global economy and disrupted the world as we know it, it has led to the loss of over 200,000 lives globally, with Nigeria having its fair share of casualties.

“It is then most despicable of Comrade Oshiomhole to show such insensitivity by spitting on the graves of these people; endangering the lives of millions of Edo people and undermining the efforts of government at the state and national levels to halt the deadly campaign of this invisible enemy.

“Comrade Oshiomhole on Thursday, April 30, 2020, organised what some media outlets have come to term as ‘APC faction’s mock primaries’ in Benin City. The meeting was organised by a group of dissidents who make up the EPM with the active backing of Comrade Oshiomhole, who, it was reported, drew up a delegates list for the exercise.

“It must be noted that the gathering was held in a house of a member of the EPM, with the attendants numbering over subsisting directives on public gatherings as prescribed by the national and state governments.

“For Comrade Oshiomhole to organise this sort of gathering at this dark moment of our history as a nation, he has not only shown disregard for the health and safety of Edo people and Nigerians in general, but also proved that he has no regard for the hard-won reputation of our great party.

“It is most instructive of the kind of person that Oshiomhole is that at this time that federal and state governments are seeking for security operatives to enforce directives on safety and other public health precautions, he is deploying policemen and soldiers to a location to hold a political gathering. These security operatives should have rather been at borders and other strategic points serving the people and doing right by the thousands of health workers who are in the frontlines serving as shields against this unraveling enemy.”

Oshiomhole who is a former governor of Edo State has been at loggerheads with Governor Godwin Obaseki over irreconciliable differences.