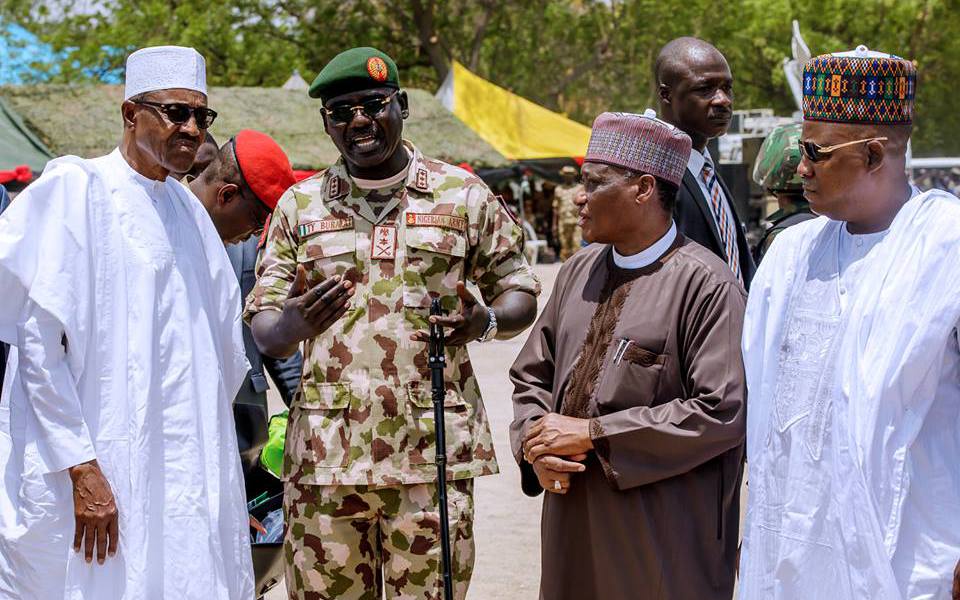 The National Democratic Front (NDF) has applauded Chief of Army Staff, Lieutenant General T.Y Buratai for his unique strategies which are yielding results aplenty in the war against Boko Haram/ISWAP terrorists.

According to the pro-democracy group, the COAS’ meticulous planning, deep thinking, experience, foresight and profound knowledge of the terrain is the difference in the theatre of operations.

The troops of Operation Lafiya Dole have recorded tremendous success in the final clearance since Lt. Gen. Buratai stepped foot in the Northeast almost a month.

Scores of the insurgents have been consumed by the troops’ continuous onslaught, the most recent in Timbuktu Triangle.

In a statement signed by Secretary-General, Dr Abdulkadir Bolaji, the NDF said that this progress is as a result of deep thinking on the part of the military high command as well as painstaking calculations and meticulous planning.

The group added that this isn’t much of a surprise as the COAS is known as a master strategist, a thoroughbred professional and commander with vast knowledge in military warfare while climbing the ranks.

Like George Washington, the NDF noted that Buratai reviewed the old strategies used by troops and out-thought the enemy by adopting a unique fighting approach.

The National Democratic Front, however, urged the COAS to share his secret with the other nations so that rooms are not created for the insurgents to explore through the weakness of one country to hide and nurse their wounds as it happened in the past.

Gradually, even those who had disparaged the Nigerian Army over the news that its Chadian colleagues had flushed out Boko Haram and ISWAP terrorists from its territory, are beginning to concede that Nigerian troops were misjudged on the basis of a single operation but are more coordinated and better.

In the past two months, the Nigerian army through a streak of victories over Boko Haram and ISWAP terrorists has shown that it has not lost the verve and composure it has come to be known for over the years.

Between April and now, Nigerian troops have penetrated the fortresses of insurgents with liquidated top commanders and foot soldiers of the sect, set confusion in their midst, scattered their ranks and pummelled their topiary.

Only last week, within a spate of 24 hours, troops of Operation Lafiya Dole through a coordinated artillery bombardment on Timbuktu Triangle and another artillery engagement in Buk, Damboa LG of Borno State, killed 134 number of Boko Haram and ISWAP terrorists.

This is in addition to the victories recorded against the insurgents only last month in which over of the terrorists were similarly liquidated.

The National Democratic Front, NDF, wants the world to note, that these victories were not by accident but as a result of deep thinking on the part of the military high command ad well as painstaking calculations and meticulous planning.

We want the world to know that having followed the professional progress of the Chief of Army Staff, Lt. General Tukur Yusuf Buratai, we have noted that what is happening now in the theatres of operation is consistent with his character as a meticulous planner, deep thinker, experienced strategist and a sharpshooter.

Right from his days at the Army Headquarters where he served in the Department of Army Policy and Plans, Abuja; from where he became Assistant Chief of Staff Administrative Matters at the Infantry Centre Jaji; to when he became a Major General and was appointed Commandant, Nigerian Army School of Infantry, Jaji; to when he was appointed Force Commander of the Multinational Joint Task Force (MJTNF) before he became Chief of Army Staff; Lt. General Buratai, has been known as a master strategist and thoroughbred professional and commander with vast knowledge in military warfare owing to his experience and study of military strategy the world over.

We make bold to say that Nigeria is lucky to have a planner- strategist at the helm of the military command at a time the nation is ravaged by the activities of terrorists and insurgents because having personnel with less qualification, foresight and experience would have put Nigeria in quandary.

The Lake Chad Region, which is bordered by four countries of Niger, Chad, Cameroon and Nigeria has made the fight against Boko Haram and ISWAP terrorists quite unique and different from other theatres of operation.

While military expeditions in Afghanistan have only the mountainous terrains to contend with and in Somalia, the vast land and waters, the Lake Chad Region combines all the environmental challenges and more.

From the Nigerian and Cameroonian sides are high mountains with steep and creepy slopes while on the Nigerien side are vast stretches of desert land and between Chad are both land and water.

Past military expeditions that relied on surmounting the challenges from a particular angle have failed until the current Chief of Army Staff used a different strategy that took into cognisance the uniqueness of the challenges posed by the undulating terrain.

Like George Washington, the veteran military tactician who got the highest honour as a military officer did in the battle to win New York, Buratai, reviewed the old strategy used by troops and out-thought the enemy by adopting a unique fighting style suitable to the conditions at hand.

Washington is known for studying through the detail of army operations, including logistics and is said never to have led a large army into battle but relied heavily on the art of surprise, using tactics like ambush to overwhelm the enemy.

In the case of Nigerian troops, Buratai used the element of right timing to take the battle to the insurgents.

He, like Washington, must have reasoned that in a long war of attrition over a large territory with large scale military engagements like the one in the Lake Chad Region, that careful deliberation was the most appropriate strategy and he applied at a time the insurgents least expected which is coming with harvests of victories that we are witnessing today.

These basic elements of applying the right strategy at the right time were what helped Washington achieve a decisive victory which ended the American Revolutionary War.

We therefore commend General Buratai for his brilliance and application of the best military strategies to conquer the Boko Haram and ISWAP terrorists who have become irritants in the Lake Chad region.

We believe that the recent events in the theatre of war are precursors to a final battle which would route out insurgents entirely from the region and end the war as Nigerian troops have succeeded in regaining the confidence of the citizenry.

Buratai has shown that Nigeria will conbattlefieldain its pride in the comity of nations as the first to defeat this kind of insurgency.

We applaud the efforts of the Nigerian Army Chief and that of the entire troops in the battle field and wish them success in the final push to decapitate Boko Haram and ISWAP.

We urge members of communities around the Lake Chad region to cooperate fully with Buratai and the troops as victory is in sight.

We call on commanders of troops of neighbouring African countries to rise above the mundane and emulate the style of the Nigerian Army Chief which is bringing results.

The Nigerian army Chief must be magnanimous enough to share his secret with the other nations so that rooms are not created for the insurgents to explore through the weakness of one country to hide and nurse their wounds as it happened in the past.

We join our voice with that of others to call on the army Chief to live up to his promise not to leave the theatre of war until total victory is attained.

We commend President Muhammadu Buhari for putting a round peg in a round hole in the fight against insurgency and terrorism.