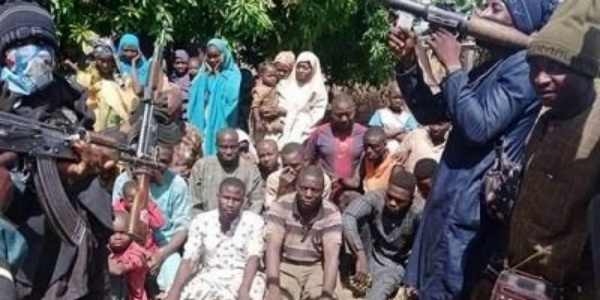 Niger State Governor, Sani Bello, as well as three senators representing the state at the National Assembly, have been urged to wake up from their slumber and face the realities on the ground as regards insecurity.

The Arewa Citizens Against Insecurity (ACAI) gave this charge at a press conference on Friday in Kaduna following the abduction of 42 persons at Government Science Secondary School, Kagara.

In his remark, Secretary-General, Hosea Adamu called on Governor Bello to stand up to his responsibility as a chief security officer of his state.

Adamu said the governor should be blamed for the current situation in his domain, noting that he never took proactive steps knowing fully well the risks arising from the activities of bandits in neighbouring states.

The Arewa group, however, advised the governor, the Senators, other lawmakers in the state as well as political office holders to liaise with President Muhammadu Buhari to restore peace and security.

According to Adamu, religious and traditional leaders should be enlightened on the need to stop their followers and subjects from being facilitators for these terrorists.

He added that the governor and other leaders in the state must act fast rather than flood the public domain with irresponsible comments.

Gentlemen of the press, we have come to a point at which we must all as Nigerians make the urgently needed intervention to save our dear country from the pillage of devourers that are encircling and rapidly strangulating the land. This strangulation is manifested in the growing insecurity in the land coupled with ethnically motivated violence.

The abduction of 42 persons at Government Science Secondary School, Kagara Niger state, is drawing reactions and criticisms but people hardly know the extent of the insecurity that is rocking the country, particularly in the north where so-called bandits now hold sway in much of the north-western states. A similar large-scale abduction had taken place in Kankara, Katsina state previously and it turned out that persons in government were collaborators who made that crime possible.

We all know that the major corridors in Kaduna, Niger, Katsina, Kebbi, and Zamfara states are now hotbeds of kidnap for ransom. It is now almost impossible to traverse the entire region without being kidnapped for ransom. This is a situation that has benefitted from the collusion of state and local governments as well as the traditional institution in many instances.

It would be difficult for those in authority to argue that there were no security or intelligence reports that should have prompted them into reactiveness and deal with these issues before they escalated into what they are today. What further happened was that the situation was allowed to degenerate into a full-blown crisis before some otherwise responsible people began to flood the public opinion space with irresponsible comments.

In this category are the state governors who have practically abdicated their responsibility as the chief security officials of their states. They have persistently failed in their duty while piling the pressure on the Federal Government and creating the impression that everything, every problem the country has with security has to be resolved through the barrels of guns or the military without acknowledging that there are non-combat approaches that fall within their own sphere of responsibility.

In this regard, we are calling out Niger State Governor, Abubakar Sani Bello, who never took proactive steps even when he and his state’s security council were fully aware of the risks factors arising from the activities of bandits in the states bordering Niger. He should be explaining to his people why he never thought to request security presence for the boarding schools in his domain after the Kankara incident but instead allowed Kagara to happen before ordering the closure of boarding schools.  It is depressing that he allowed things to get out of hand before now approaching Mr. President to declare an emergency in Niger state.

More worrisome are the other political office holders, like Senators Mohammed Enagi (APC-Niger South), Sani Musa (APC-Niger East), and Aliu Sabi Aliu (APC-Niger North) who rather than come up with useful prescriptions in the wake of the Kagara abductions rather vested themselves in excoriating President Muhammadu Buhari as if he was the one who empowered the extremists that are now tormenting people in the constituencies where they were hired and enabled by politicians.

Are Citizens Against Insecurity cautions Governor Bello, the three federal lawmakers, other lawmakers in the state and political office holders that are positioning to derive relevance from the present security situation to recalibrate their positions?  It is unacceptable that some lawmakers, particularly those elected on the platform of the APC will latch on the security situation in their state as an opportunity to demonize the laudable efforts of Mr. President through whom the federal government is doing everything possible to bring the ugly situation to an end.

What we expect them to do is to work with President Buhari to restore peace and security to Niger state. In doing this, they should task the network of religious and traditional leaders at their disposal and impress on them the need to stop their followers and subjects from being facilitators for these terrorists. They should prevail on their people to massively engage in information sharing and offering support to law enforcement. Niger should also interact with its neighbours to explore other solutions that will keep these criminal elements out of the entire northwest region.

Our concern is that time is running out to find a solution since there is every likelihood that this new brand of terrorism will spread to other northern states if governor, the senators from Niger state and other high ranking politicians from that place do not stop their petty bickering against President Buhari in the middle of a serious crisis. The rest of us do not want to be partakers in this life-threatening game of playing with fire so Governor Bello and his three senators should spare us the heartache they want the entire country to experience.

We, therefore, demand that the Niger State Governor and the three senators from the state wake up from their slumber to the realities of the day. The realities are that their ineptitude has made their state an attractive place for terrorists, the reality is that President Buhari is not indifferent but is already acting to solve the problem, the reality is that the people of communities have a responsibility to themselves to call for help when aliens come among them to gather information, and the reality is that the problem in Niger state now requires multi-stakeholder collaboration to address. This is what the political leadership of Niger state should be exploring and not reduce themselves to object of ridicule.