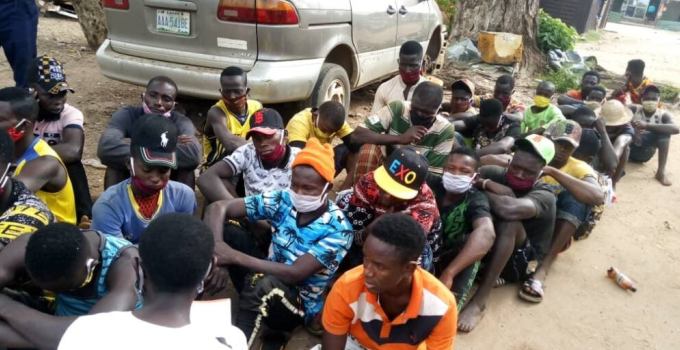 No fewer than 35 young men have been arrested by the men of the Nigeria Security and Civil Defence Corps in Osun State (NSCDC) while trying to sneak out of the state.

The State Commandant of the Corps identified as Adeyinka Oguntuase disclosed that the boys were arrested while hiding under the guise of darkness to travel out of the state.

Oguntuase added that they were traveling in two buses without cognizance of the social distancing measures.

One of the arrested northerners revealed during interrogation that they were trying to travel through Ede to Ogbomoso and head to Sokoto.

The guys were arrested last Monday night while trying to sneak out of the state despite the ban on interstate travel to go all the way to Sokoto state.

They even revealed that they deliberately decided to travel at night to escape being caught.

We have called on the leader of Hausa community in Ilesa intimating him of the development and he felt bad, saying he has spoken with his subjects on the need to obey the rules set by the government in its bid to curb the spread of the coronavirus pandemic.

The NSCDC commandant said the arrested men would be taken back to Ilesa, where they reside and handed them to their leader.

“We are making arrangements on how to return them to Ilesa and hand them over to their leader with a view to ensuring that they live within the ambit of the law”, Oguntuase added.