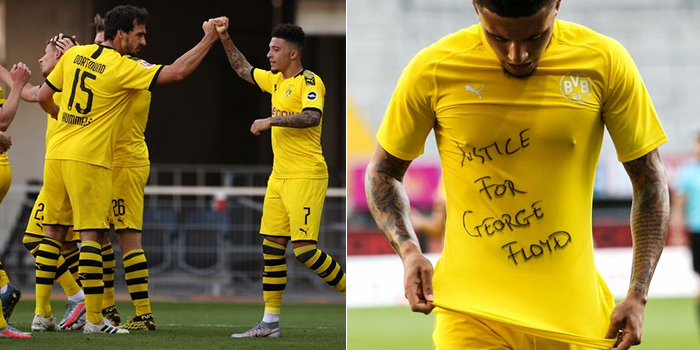 Borussia Dortmund’s Jadon Sancho scored a hat-trick today and revealed a “Justice for George Floyd” T-shirt amid several protests over the death of George Floyd.

George Floyd, an unarmed black man who policemen in the United States of America choked to death.

Sancho’s three goals helped Dortmund to a 6-1 romp at bottom side Paderborn.

In addition to Sancho’s hat-trick, Thorgan Hazard, Achraf Hakimi and Marcel Schmelzer also got on the scoresheet.

The 20-year-old Sancho who celebrated his first goal by revealing an inner T-shirt with the inscription, ‘Justice for George Floyd’ was booked for removing his jersey.

US Embassy staff in Nigeria observes 84 seconds of silence in…

In other news, following the killing of George Floyd, an unarmed black man by police in the United States, thousands of Black Lives Matter protesters have marched across central London on Sunday to protest against the killing.