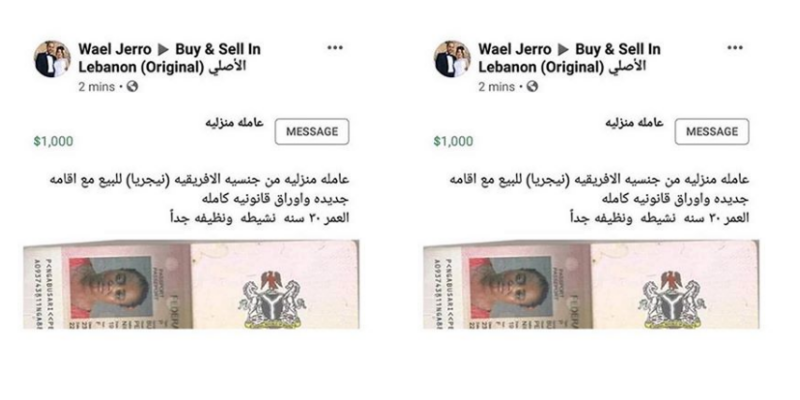 The Nigerian lady, Ariowolo Olamide Temitope who was recently put up for sale for $1,000 on Facebook in Lebanon, has refused to return to the country.

This revelation was made by the Chairman, Nigerian Diaspora Commission (NIDCOM), Abike Dabiri-Erewa.

According to her, Ariowolo turned down all entreaties to return to the country. She said the 31-year-old said she has secured another job and hence she would prefer staying back in Lebanon.

“Not even the plea by her State government, Oyo state could make her change her mind as she insisted on staying back,” she added.

Recall that, weeks ago, a Lebanese, identified as Jerro, announced the sale of a Nigerian woman on Facebook.

Jerro, who resides in Beirut Lebanon, sent in an image alongside the data page of the 30-year-old Nigerian, Peace Busari Ufuoma on a Facebook group called ‘Buy and Sell Lebanon.’

Pope Francis prays for peace in Nigeria amid #EndSARS crisis

He also placed a $1,000 bill on the domestic worker, saying the Nigerian was very active and very clean.

It was observed that the passport, which was acquired in May 2018, indicated that the victim hails from Ibadan, Oyo State.

The incident, which generated diverse reactions, was brought to light by an Instagram user, @thereneeabisaad, who called on the Nigerian government to save the victim.