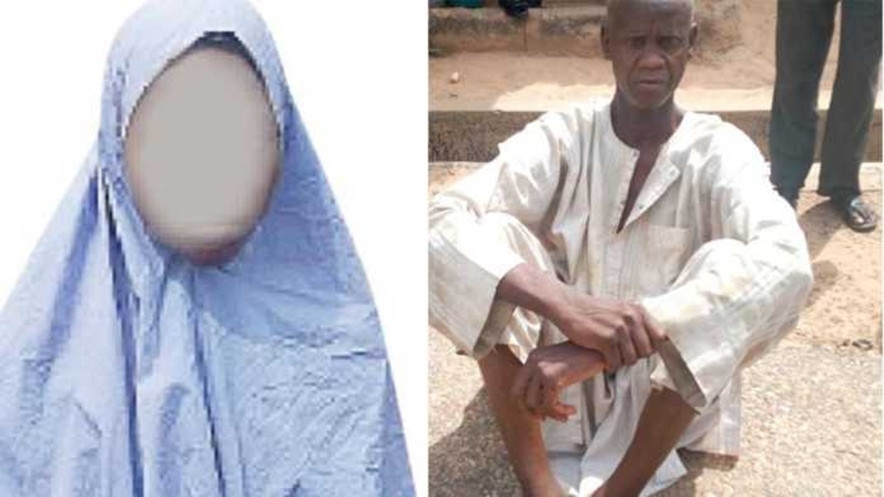 After Ashiru Sule, 71, denied raping a 13-year-old girl and using her to steal, the victim (name withheld), gives an account of what transpired between her and the aged man.

Recall that Within Nigeria earlier reported that Ashiru Sule, a seventy-one-year-old grandfather, who was nabbed after allegedly raping a 13-year-old girl and using her to steal in Gombe State, denied raping the girl in question, saying that she lied against him as he had nothing but a business relationship with her. Read here.

The 13-year-girl shares her side of the story, insisting that  Ashiru raped on numerous occasions and used charms on her…

You alleged that you were raped by a 71-year-old man, how did it happen?

Baba (A respectful form of address for an older man) here raped me several times; I can remember 10 times that he raped. He started doing it when I was staying with my grandmother.

How long have you known him?

I’ve known him for more than two years. He lives in my area, close to Galdimari quarters in Gombe, but he started behaving strangely towards me when we met in the big market.

I noticed that each time I went to buy maize, he would give me N1,000 worth of maize and also mix something inside a bottle for me to drink. He also gave me a locally made charm known in Hausa as ‘laya’ to bury in the house.

What   did he say the charm was meant for?

He said it would make me invisible and that I would not be caught if I stole. This was because he made me start stealing maize for him to sell. He made me start looking for where to steal for him. Sometimes, he would take me on his motorcycle and whenever there was an opportunity to steal, I would do so. After selling the maize, he would keep the money.

How many containers of maize did you steal for him?

I successfully stole 146 containers that I took to him.

How did you manage to carry the stolen maize?

I used tricycle to transport it to him.

Are you a pupil?

Yes, I am. I attend a school in the barracks.

What do you hope to become in the future?

When I grow up, I want to become a policewoman. I want to help sanitise society.

What do you want the police to do to him?

I want nothing but justice to be done, to teach others a lesson.