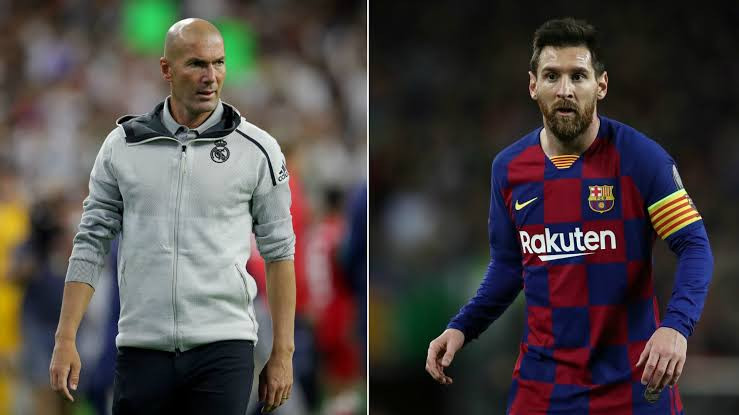 Real Madrid coach Zinedine Zidane has responded to growing transfer rumors that Barcelona legend, Lionel Messi, could leave the club after this season.

Messi has been at Barcelona since he was 12 and has won every laurel in club football while at the club side, but disagreements with head coach Quique Setien and recent disappointment in the champions league has made the striker question his loyalty to the club according to reports.

Rivals, Real Madrid beat Getafe on Thursday night to climb four points ahead of Barcelona with five matches remaining in La Liga. And with the Champions League filled with strong opponents, Barcelona could end the season without any major trophy.

Asked on his thoughts if he will like Messi to leave or stay amid the rumors, Zidane said;

“I don’t know what will happen but we hope not because he is in this league and we want the best in this league,” Zidane said post-match.

Sergio Ramos was the hero for Madrid against Getafe, scoring the only goal from the penalty spot in the 79th minute at the Alfredo di Stefano Stadium.

“Our captain is our leader on the field, but also outside,” Zidane said of the Spain skipper, who took his career total to 100 goals.

“He is an unrepeatable player. He is unique and we know what he transmits to everyone else. I’m happy for him for his goal because when it comes to shooting a penalty, he has a lot of confidence.

“It’s almost in the 80th minute and Dani Carvajal’s effort in goal is from the whole team. We know that with patience and tranquility we can score goals. This is what happened.

“The last 20 minutes with freshness we claimed a very important result. We have to congratulate all the players because what we are doing is not easy.”