The Nigerian Achievers award which aims at inspiring, promoting and celebrating great achievements has honoured  popular Nollywood celebrities, Faithia Williams, Sola Sobowale and some other prominent Nigerians as their “women of essence 2020 Honoree”.

According to the organisers of the Nigerian achievers awards, women with great impact and achievements are the ones who emerged as winners. Some of the winners include; Tayo Sobola, Bukunmi Oluwasina, Sola Sobowale, Nkechi Blessing, Royal highness, wife of OOni of Ife, Queen Silekunolanaomi Ogunwusi and a few to mention. 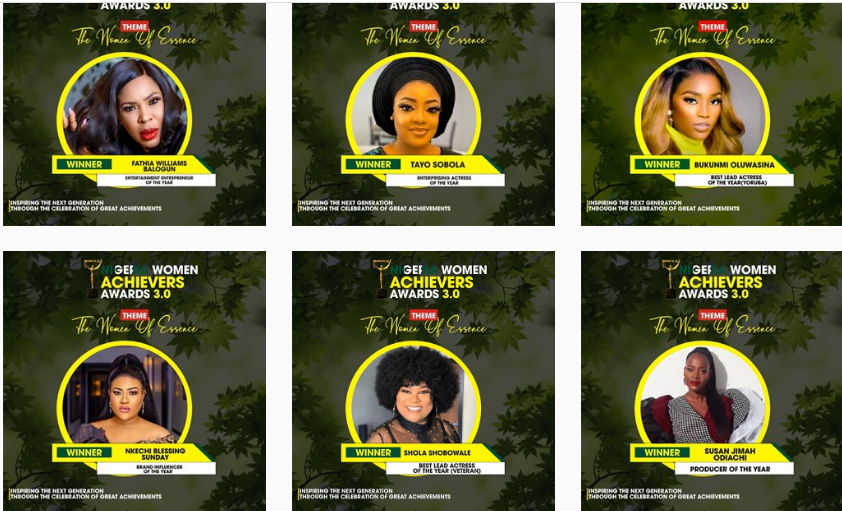 Reacting to this big win, 51 year old, Faithia williams who won the entertainment entrepreneur for the year 2020, took to her official Instagram page to announce the good news. As expected, congratulatory messages have been falling in place for the ageless beauty.

Why I Don’t Kiss In Movies – Nollywood Actress, Angela Samuda Opens Up

See some messages below;

Recall that In 2008, Faithia won the Africa movie Academy Award for the Most Outstanding Actress Indigenous and her movie Iranse Aje won the best indigenous film of the year. In April 2014, she won the Africa Movie Academy Award, having emerged as best actress of the year along with Odunlade Adekola who emerged as best actor of the year. She also won the Best Indigenous Language: Yoruba award for the work done in the film Iya Alalake at the 2015 Africa-Magic Viewers’ Choice Awards AMVCA