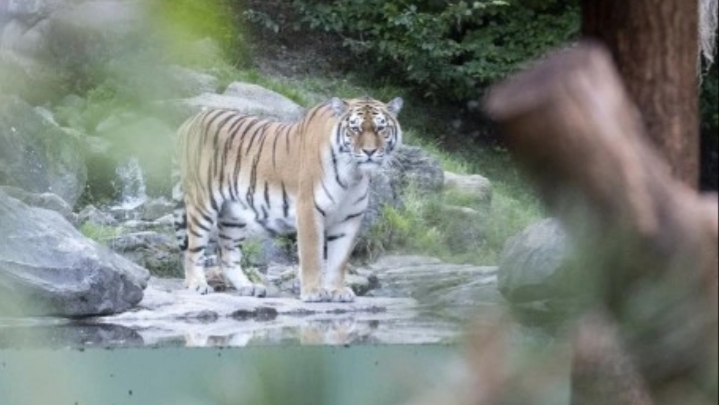 Tragedy as a female zookeeper has been reportedly mauled to death by a female Siberian tiger at Zurich Zoo in front of horrified visitors.

WITHIN NIGERIA learnt that the tiger identified as Irina attacked the 55-year-old zookeeper inside the big cat enclosure shortly after 1pm local time on Saturday, July 4.

According to report, sightseers who were horrified raised the alarm after the attack began.

Zurich police spokeswoman Judith Hoedl said; staff members rushed to the 55-year-old’s aid and tried to resuscitate the zookeeper but “sadly all help came too late,”.

In a statement, a zoo spokesperson said “the zoo’s internal emergency centre received a message that an animal keeper in the tiger facility had been attacked by a Siberian tiger.

“A group of zookeepers immediately moved to the enclosure.

“They succeeded in luring Irina away from the animal keeper, out of the facility and into the stable.

“Despite immediate resuscitation measures, the 55-year-old woman was unfortunately too late to help and died on the spot.”

They added: “How the tragic incident happened and why the animal keeper was in the enclosure at the same time as the tiger is now being examined by the public prosecutor, the police, and forensics.”

Zoo director Severin Dressen later told reporters: “Our full sympathy is with the relatives of the victim.”

He said that the keeper had been a long-term member of the zoo staff.

“This is a young animal that so far has behaved entirely naturally as a tiger does,” Dressen added.

Irina was born in 2015 at a zoo in the Danish city of Odense and transferred to Zurich a year ago, according to Dressen.

She had replaced a female who died from complications after a fight with another tiger in the enclosure, Sayan.

Visitors and colleagues who witnessed the attack were receiving psychological counselling, he added.

The zoo, which only recently reopened following a coronavirus shutdown, will remain closed on Sunday.